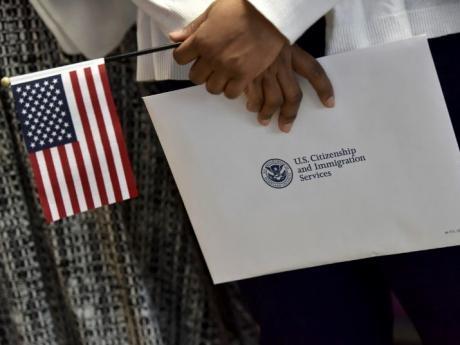 The new measures are designed to clear some 9.5 million backlog applications which have stymied family reunification, green card renewals, work visas as well as applications by permanent residents to become US citizens.

Jamaican family members who have had petitions pending before the United States immigration department will now see their applications fast-tracked under new arrangements announced by the administration.

The new measures are designed to clear some 9.5 million backlog applications which have stymied family reunification, green card renewals, work visas as well as applications by permanent residents to become US citizens.

According to the new processing guidelines, United States Citizenship and Immigration Services (USCIS) officers should process applications, including those for US citizenship, Deferred Action for Childhood Arrivals renewals and green card requests for family members or employers, within six months.

Another rule change will be in the hiring of more caseworkers and improving the processing technology to meet new timelines for processing applications.

September 2023 is the target date to significantly reduce the backlog.

A senior government official on Tuesday said the USCIS plans to expand the number of applicants who can pay extra fees to have their immigration petitions adjudicated more quickly, propose a rule that would provide relief to immigrants waiting for work permit renewals and set processing time goals.

The new rule will also provide temporary relief to immigrants who have not had their work authorisation renewed.

Under the current rule, work authorisation is automatically extended for 180 days but in many instances because of the backlog, the extension period has passed.

The USCIS has struggled with processing backlogs for years but the onset of COVID-19 led to a shutdown of in-person interviews and other services which greatly exacerbated the problem.

Irwine Clare, head of the Queens-based Caribbean Immigration Services and a local community activist, said the clearing of the backlog will have a ripple effect on both Jamaica and the United States.

“Family reunification will be significantly impacted. It is a significant winner as families in Jamaica have been held in the balance because of the backlog in processing applications,” he said.

Clare said that the slow-down in the processing of visa applications was systematically orchestrated over the four years before the Biden Administration.

He called the announcement by the Biden Administration good news pointing out that since the beginning of 2021 many people were denied having their applications processed in a timely manner.

“Many people were exposed to the possibility of deportation because they could not get their green cards renewed and it also affected their ability to work,” he said.