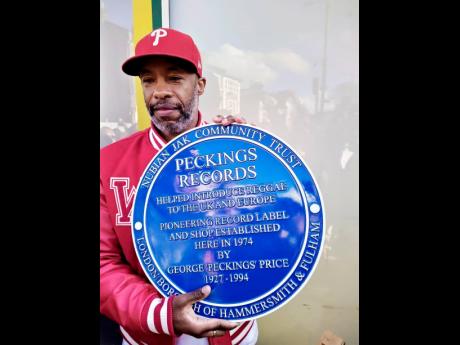 A pioneering music label, which has nurtured global appreciation for reggae music, has been commemorated with a blue plaque in west London.

The prestigious sign was unveiled recently outside Peckings Records, in Shepherds Bush, a hub for the promotion of reggae music and its artistes for nearly 50 years.

The name George ‘Peckings’ Price, the founder of the record label, is inscribed on the plaque. The entrepreneur from Kingston, Jamaica came to London in 1960 and, before long, distributed ska and reggae music to respected sound systems, including Coxsone, Jah Shaka and Hawkeye.

During a career spanning nearly 60 years, Price not only engendered a love of Jamaican music in London, but globally, including countries such as Mexico and Japan.

Speaking exclusively to The Weekly Gleaner, Chris Price, the son of George, described the family’s reaction to the recognition.

He said: “The family is overwhelmed by the commemoration of my father’s record label. Anyone that visits the store can see the plague and where the development of reggae music started in London during the 1960s.

“Peckings Records grew slowly, as it worked with artistes such as Coxsone, Prince Buster and Duke Reed. Dad also helped and encouraged young deejays (DJs) by teaching them about the history of reggae music and sound systems.

“He was instrumental in initiating the careers of prominent DJs like David Rodigan and Daddy C.

“Famous rock and punk bands, including The Who, The Clash and Sex Pistols would buy records from the shop. But reggae enthusiasts would travel from France, Berlin, Mexico and Japan to buy music from my father. He created a great legacy.”

George Price died in 1994. Since the death of ‘Peckings’, the record label and shop have been operated by his four sons, who have collaborated to release 100 records and albums. In 2013, the business was awarded Best Label and Producer at the British Reggae Industry Awards.

British DJ David Rodigan MBE, described the achievements of Price recently in The Voice, a newspaper read by the African Caribbean community in Britain.

He said: “George Price made an immeasurable contribution to the evolution of Jamaican music in London with his tireless passion and enthusiasm for the promotion of Studio One music, a catalogue quite unlike any other. For this, and so much more, we all owe Peckings a huge debt of love and respect.”

The blue plaque was installed by the Nubian Jak Community Trust, which promotes the historic contributions of black people in the United Kingdom.