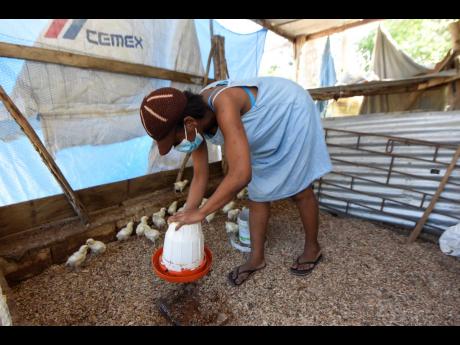 Nicholas Nunes/Photographer
Kedesha Channer tends to a chicken waterer insider her coop in Ridge Town, St Elizabeth. Channer, who raises chicken to sustain herself and her family, is seeking help to build a house, establish a grocery shop and to go towards an operation to treat her scoliosis. 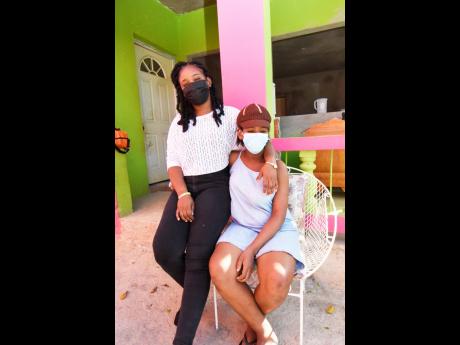 Nicholas Nunes/Photographer
Kemesha Channer (left) is hoping her sister, Kedesha Channer, will get the much-needed assistance.
1
2

At age 14, Kedesha Channer’s dreams of becoming a nurse went up in smoke as she stopped attending school to avoid jeers after she started showing symptoms of scoliosis.

The condition, which is a sideways curvature of the spine, is most often is diagnosed in adolescents.

“Growing up, you never understand [scoliosis]. You never have no confidence in a yuhself. Yuh just feel like you alone in this,” the St Elizabeth native told The Gleaner recently.

“Growing up, even going to high school people always asked me, ‘What happened to your back? You meet into an accident?’ and so forth. Sometimes you feel like the earth could open and take you in; that’s the feeling I have. I used to cry ... . That strained my dream,” the now-34-year-old reflected.

The teasing and constant physical pain caused Channer to fall into depression and worsened when she could not secure a job, given her disability.

“I can’t do much lifting, so I once worked as a cashier, and I tried working at a tourist attraction place, but that don’t work out for me,”said Channer, who now raises chicken on a small scale.

Over a decade ago, she became aware of the possibility that her disability could be corrected with surgery, but her family could not afford the $500,000 to cover the procedure and purchase pins.

Thus, she continued to hide at home.

Her self-esteem only began to rebound when she discovered she was in a better position than some other persons with the condition.

“I went to Kingston Public Hospital and I discovered that some people are worse than me over there and I kinda [started] feel[ing] better in myself,” she told The Gleaner.

Channer still wants to do a posterior spinal fusion with instrumentation (artificial implants), but neither she nor her relatives are able to fund that treatment.

The mother of four sometimes classifies herself as being “homeless” and is seeking help to build her own home after being evicted from the house in which she lived with children and their father.

“Where I used to live, it wasn’t mine at the time, and [the owners] want their space because they said they need to renovate the place and so forth,” she explained.

Channer and her children have now moved in with her father and two of her older brothers at her dad’s small house in St Elizabeth until she is able to build on the family’s land.

The father of her children, who is a taxi operator, is not currently in a position to give any significant assistance.

Channer has been trying to earn an income by raising 50 chickens at a time, but profits from that venture have mainly gone into schooling her children with precious little to do anything else.

She is now considering opening a grocery shop, but she has no capital to build or stock it.

“What I really need right now is a place to stay. I have land, but I don’t have any material, and I really want somewhere for me and my children, so I would build even a board structure if I could get some assistance,” Channer pleaded.

Her younger sister, Kemesha, who Channer look after while skipping school, bolstered her plea.

“I would really like to see my sister get through in life. We grew up together. She raised me ... so any way I can help her, I always try to do it,” Kemesha said.

“She really needs a house. It don’t have to be anything big like a concrete house. It can be a board house, where she can be comfortable,” she added.