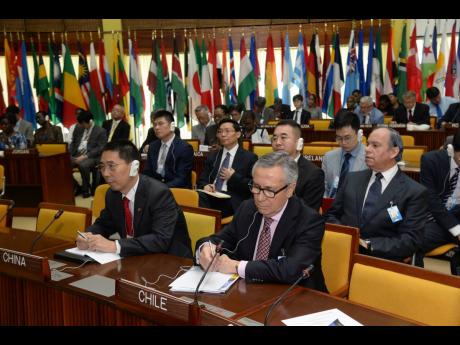 File
Participants at the 23rd Session of the International Seabed Authority ,at the Jamaica Conference Centre in Kingston on Tuesday, August 8, 2017.

MEMBERS OF civil society and the scientific community have urged a delay in the acceptance of regulations for deep-sea mining coming out of the most recent meeting of the International Seabed Authority (ISA) in Kingston.

ISA – comprised of 167 member states and the European Union – is mandated under the UN Convention on the Law of the Sea to ‘organise, regulate and control all mineral-related activities in the international seabed area for the benefit of mankind as a whole’. The ISA Council concluded the first part of its 27th session in Kingston on April 1, held to deliberate, among other things, the draft regulations on the exploitation of mineral resources.

Civil society actors concerned with the protection of natural resources and members of academia now maintain that enough is not yet known about the deep sea environment to proceed, at this time, with mining.

“We need to slow down and instead of pushing ahead to come up with the regulations, which is essentially giving a green light to mine, it is critical to do further research to better understand the likely impacts. We are already struggling from the impacts of climate change, we shouldn’t be adding further fuel to the fire – since what we know is that deep-sea mining has the potential to destroy important carbon sinks and disturb global fisheries. So a moratorium is definitely needed,” said Dr Theresa Rodriguez, chief executive officer of Jamaica Environment Trust.

On the heels of the meeting, Greenpeace, an independent campaign organisation concerned with exposing environmental problems and promoting solutions, issued a release, itself calling for a moratorium on the regulations that are proposed to come on stream in 2023.

“It is clear from the past two weeks that ISA member states are starting to wake up to the fact that if deep-sea mining were to be given the go-ahead in just over a year, the damage to the ocean and marine ecosystems would be irreparable, and critical carbon sinks could be at risk,” the April 4 release quoted Duncan Currie, who represented the Deep Sea Conservation Coalition, as saying.

“It is disappointing, however, that to date, no state has called for an outright moratorium. Time is running out. States need to commit to a moratorium and to see that no regulations for exploitation are approved. We must be perfectly clear: adoption of regulations means giving the green light to deep-sea mining,” he added.

Local marine scientist, Professor Mona Webber, has herself noted the need for countries to pace themselves.

“I share the concerns and support that there should be no issuing of licences until we know more. The deep sea is the largest habitat type on earth covering more than 50 per cent of the globe and over 80 per cent of ocean area. Due to the great depths of approximately 6,000m with a few areas being as much as 11,000m (this is four and seven miles deep), the deep sea floor remains largely unexplored,” she cautioned.

“It is also very difficult to conduct experiments to investigate how deep-sea mining would affect the ecosystems, associated biodiversity and biogeochemical cycles (including carbon removal and burial),” added Webber, who heads the Centre for Marine Sciences at The University of the West Indies.

According to the professor, there is much at stake that must be prioritised as part of the decision-making on deep-ea mining. As an example, she said that the deep sea is considered one of the most biologically diverse areas on earth – “some think with higher biodiversity than coral reefs”.

“It is theorised that this is because it is so vast but also because it is stable and has remained undisturbed for such a long time. The deep sea also has these unique features like hydrothermal vent fields where giant animals that are found nowhere else on earth exist,” she explained.

“These vent fields with their high sulphur emissions and associated resources (poly-metallic sulphides, cobalt rich ferromanganese crusts and poly-metallic nodules) are the prime target of miners. Only about 20 of these major vent fields have been mapped and this is not a lot of the deep sea area (each vent field is approximately 60m wide) and if mined and the biota destroyed, it would take millennia for them to develop again,” Webber said further.