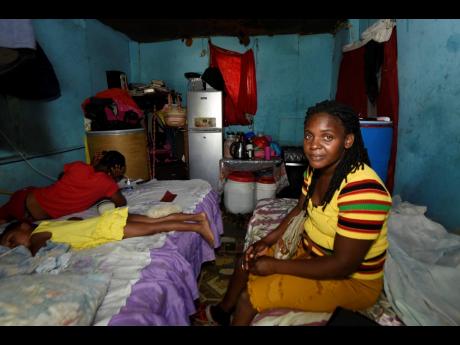 Nicholas Nunes/Photographer
Inside the one-bedroom house that Delmoi Bailey shares with her mother and four children. 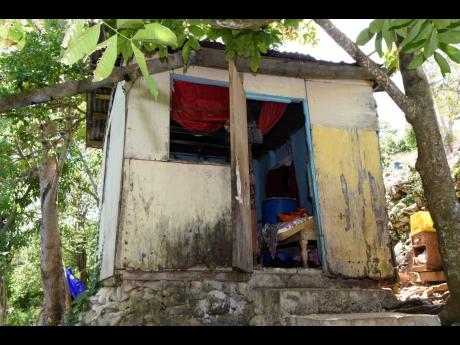 Nicholas Nunes/Photographer
The one-bedroom board shack that the family of six call home. 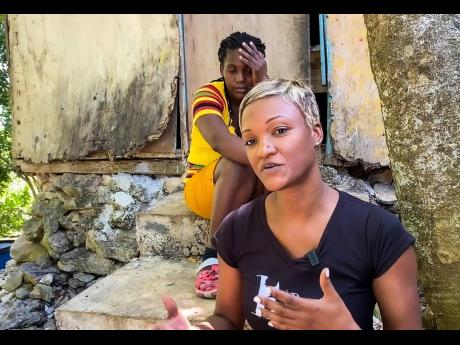 Nicholas Nunes
Michelle ‘Boss Mom’ Gordon (right), with the help of other donors, will be building a house in Ridge Town, St Elizabeth, for Delmoi Bailey (left) and her four children, which is expected to be handed over on Mother’s Day. 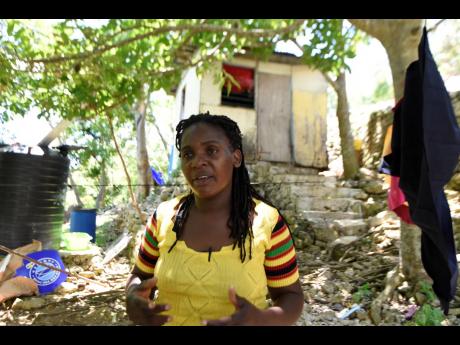 Delmoi Bailey has been living inside an 8’x8’ dilapidated board structure in Brighton, St Elizabeth, for the last 12 years, in which she raises her four children.

The house, which has two single beds, a fridge and a stove, was originally owned by her mother who still lives there.

Bailey and her children, ages 14, 12, nine and four, were made homeless when a fire razed her house 12 years ago, forcing her to “pack up inside” the 8’x8’ structure with her mother.

“We affi just rotate it at times pan di two bed with the six of us. It is rough to live in one room with four children and my mother, but I just tell myself ‘life is not going to be the same’ because God can just change your life in a minute. I always have that thought,” Bailey told The Gleaner.

The struggle is great, and Bailey, although she admits to having made mistakes in the past. Still, she tries to survive and takes care of her family by selling ground provisions in the nearby town of Black River. Some of the crops she sells have been planted innovatively by her and the children on nearby lands.

“I do little farming, but I don’t have [enough] land, so what I do is I have some tomatoes right now, and some hot peppers coming up, so when the cabbage is about to cut out, I’ll plant tomatoes through it and drop the peppers,” she said.

Amid earning from sales, she told The Gleaner that all her earnings are oftentimes spent directly to send her children to school with bus fares and lunch money.

Selling her load in the town area is also a major challenge, Bailey added.

“Sometimes I’m on the street, the police rush us and we have to run with our load. I don’t have nothing [against them] because they’re doing their work and I’m doing my work,” she said.

Bailey said her faith in God has kept her through the struggles.

“If you don’t doubt God, anything that is impossible, God can make it be possible … Mi always a sing! Mi always a worship! Nuff time mi wake up from 3 and 4 o’clock a pray and know that God will come through for me,” she said.

This worship, she now believes, has resulted in Food For The Poor Jamaica and partner, Boss Mom, offering to build and furnish a house for her as a Mother’s Day gift this year.

For the last four months, Bailey said she has been depressed, but this news has given her a new perspective on life.

She recalled becoming depressed after having a stillbirth last November due to the umbilical cord being wrapped around the fetus’ neck while inside her womb. The father for her first three children has become disabled after being chopped up by residents and now lives in a nearby infirmary.

“From the 21st of November, I’ve been going through a rough time. I had a baby and I lost it and my blood pressure got very high. All the doctors in Black River (hospital) gave up (on me), but God did not give up on me. I went into seizure the 27th [of November] and it’s only God’s mercy why I’m here … God say He gonna turn my mourning into dancing and that is what’s happening,” she testified.

Bailey added: “Even the doctors say ‘Delmoi, this is a miracle’. I almost didn’t make it to receive this blessing that God has for me.”

Bailey first applied for a Food For The Poor Jamaica house in 2017, and was not successful. She applied again in 2018 and 2020, and now she is happy she has finally been chosen, because with a house, she believes her children will be able to focus on their schoolwork in a much better environment.

Michelle Gordon, founder of Boss Mom, became teary-eyed when she visited the family and witnessed the deplorable condition in which they live.

She is elated that her network will be able to provide them, and two other families, with a suitable shelter soon.

“This year, our Mother’s Day initiative is going to hopefully impact three families. The Boss Mom network started back in 2020 when COVID just hit and it was an initiative to help mothers in need with groceries and paying some bills,” Gordon said.

“Year one, we were able to impact 30 moms. Year two, we were able to increase that with corporate support and support of other moms in business. We helped 100 mothers last year and this year we want to do it a little bit differently, instead of just giving groceries and smaller items.”

Boss Mom will go beyond paying the cost to build the three houses, they will also be furnishing them.