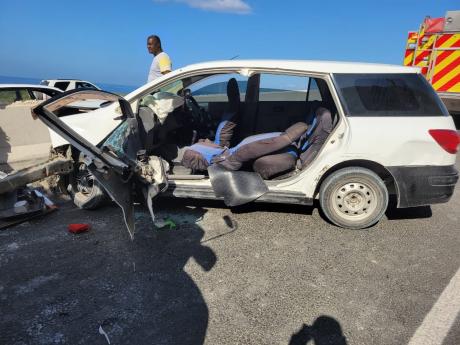 The impact of the crash caused the female passenger to be trapped inside the car and she had to be cut free with the assistance of a team from the St Thomas Fire Brigade. - Shanna kaye Monteith photo.

A woman has been hospitalised after the motor vehicle in which she was travelling this morning collided with a truck along a section of the Southern Coastal Highway in St Thomas.

It is reported that some time after 7 o'clock, the driver of a white Nissan AD Wagon and his female passenger were travelling in a westerly direction towards Kingston.

Upon reaching a section of the highway, the driver attempted to overtake a truck which was travelling directly in front of him.

The driver of the Nissan reportedly lost control of the car causing it to hit the truck before slamming into the median and coming to a halt in front of the larger vehicle.

The impact caused the female passenger to be trapped inside the car and she had to be cut free with the assistance of a team from the St Thomas Fire Brigade.

She was taken to the Kingston Public Hospital for treatment.

District officer at the Yallahs Fire Department, Delroy Williams, who was on the scene, encouraged motorists to be careful when utilising the new roadway.

Just over a week ago, traffic had to be diverted from the Southern Coastal Highway after a truck laden with sand overturned along the major thoroughfare.

It was reported that the driver of the truck failed to navigate a corner and slammed into the median before capsizing.