Ardenne principal feted by past student 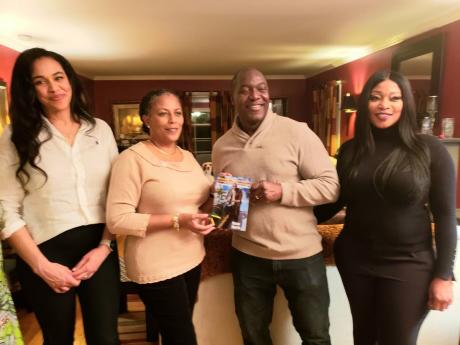 Molloy was visiting the New York/New Jersey area for a diaspora education conference and the dinner party held in the Village of South Orange brought together a number of US principals and education administrators from the tri-state area, alongside community luminaries and Ardenne graduates.

The late-evening gathering took an interesting twist. Instead of live or recorded music, attendees were asked to sing their own songs, tell their own stories and celebrate their own life journeys. This turned out to be most engaging, and it especially resonated because most of the attendees had not previously met each other. Molloy kicked off the chat segment with an illustrious overview of Ardenne, from a school of five pupils decades ago to becoming a multidimensional student empowerment centre of the Caribbean.

Others followed with their stories. Ardenne graduate Devon Harris recounted how he transitioned to becoming a sought-after motivational speaker, author and regular network TV guest after landing on the first Jamaica bobsled Olympic team, after leaving the Jamaica Defence Force.

John Rollins, a bright-spark graduate from the College of the Holy Cross in Massachusetts, recalled how a chance night out to a party on a trip to Jamaica converted him into one of dancehall’s biggest fans. He was later able to lavish his love for the music and the Jamaican culture on American media platforms as the founding publisher of Quincy Jones’ Vibe Magazine. Rollins also shaped the direction of S pin & Rolling Stone magazines.

The anecdotes were all astonishing. But the room went silent and jaws dropped when a humble ghetto graduate from Ardenne, Clive Blackwood, shared fascinating insights about his journey from Waterhouse to becoming the executive vice-president and chief auditor of the Federal Reserve Bank of New York. The former Ardenne Sunlight Cup cricketer now supervises the “largest balance sheet known to man”, surpassing US$9 trillion.

“I grew up in the heart of the ghetto and Ardenne was very good to me as the school nurtured my dreams and shaped my perspective,” the soft-spoken luminary stated with humility.

The president of the Ardenne Parent-Teacher Association, Dr Winston Delahaye, joined the party virtually from his Kingston base, and bobsledder Devon Harris presented Principal Molloy with copies of his recent motivations books. Nadine Molloy was warmly received by her education colleague and others attending the gathering. In their own discussions that followed later, the educators discovered that despite their diverse geographic locations, many of their challenges remain the same.

The evening’s menu was curated by Jamaican restaurateur Narda Morant and food stylist Ann Marie Senior with support from Jenny Regisford Campbell, an educator and outstanding home cook from Trinidad & Tobago. Morant also said prayers for Ukraine, based on the request of one of the attendees. And fibre optics corporate engineer and Ardenne graduate Anthony Turner co-hosted the evening.

“I was honoured to be in the room with such a diverse group of movers and shakers,” Jamaica-born Dr Rushell White, director of Continuous Improvement for Brooklyn North High Schools in New York, told The Gleaner. “ The evening was truly a great celebration of trailblazing excellence.”