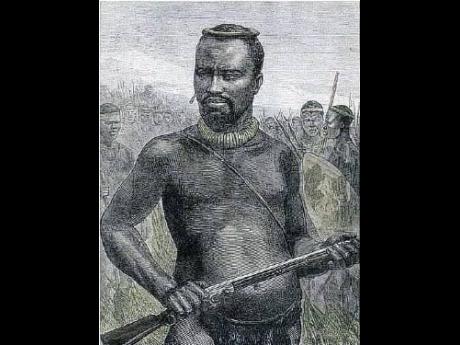 The Gold Coast (modern-day Ghana) was one of the places in West Africa to which Europeans would go to procure people to take them back to the West Indies to enslave them on plantations. One of the biggest ethnic groups there was the Akan in which there were subgroups, such as the Ashanti and the Fante.

There were frequent wars among these groups, who would capture and sell one another to the Europeans. One of the people sold was a high-ranking Fante chief called Takyi, who was said to be a good speaker of English. He ended up on the Frontier Estate in St Mary, where he distinguished himself. He had an astute mind and an impressive demeanour which made him move up the ranks to driver and then overseer, a position of great authority. He could make unilateral decisions, and had a great influence over the enslaved Akan people.

The research did not reveal when Takyi came to Jamaica nor when his name evolved into Tacky, who was known beyond the borders of St Mary. Some sources say he could have been behind the full-scale uprising by the enslaved Coromantees (Koromantyns) in Clarendon in early 1760. This was after the treaties of peace and friendship were signed between the Leeward Maroons in 1738. His plan was to defeat the British and all slave masters and create Jamaica as a separate, independent black colony.

On Easter Monday 1760, Tacky launched one of the biggest slaved uprisings in the entire period of slavery in the Caribbean. He and the enslaved from Frontier and neighbouring Trinity Estate stormed Fort Haldane in Port Maria, killed the storekeeper, and took arms and ammunition. They occupied Frontier and Trinity, and two others, Esher and Heywood Hall. The owners were promptly alerted by someof the slaved who did not support the insurrection.

By the following morning they were joined by more enslaved people, who combined to loot and burn plantations – fields and buildings– and killed people in authority. News of the St Mary mayhem spread across the island, and so did the pillage. For close to six months, the insurgents engaged the authorities and the slaves who supported them in guerrilla warfare. The colonists had never seen anything of the magnitude of this uprising; nonplussed they were.

Another strategy that the insurgents employed, according to folklore, was witchcraft. It is said that Takyi and his followers were strengthened and protected by spiritual leaders. They carried charms on their person and buried them at certain spots. Powder was sprinkled on their bodies to make it impossible for the British to hurt them.

One of the practitioners boasted that he and the rebels were untouchable. The British responded by capturing and executing him in front of the anarchists. The sight of his hanging body reminded them of what could happen to them, so some of them returned to their plantations. Yet, whether the witchcraft was effective or not, the British did not trust the practice, so they outlawed it the same year.

This execution did not stop the confrontations, so the British soldiers augmented their manpower, as the disturbance was widespread. Some rioters were eventually captured because they were overwhelmed by the superior weapons of the military and the local mounted militia. Enslaved people loyal to the British, and some Maroons, also contributed to the advantage gained by the colonists.

Takyi himself was not easing up the onslaught. He and a small band of followers kept up the attacks. He engaged the Maroons in battle in the forests, but was killed by a Maroon marksman named Davy. His head was brought to the British as evidence of his death. It was displayed on a pole in Spanish Town, but was removed by his followers under the cloak of darkness. Not all of them surrendered and returned to the plantations. Many committed suicide. There were more attacks which fizzled because of their capture and death by various means.

About 60 British died in the rioting, while the deaths among the enslaved people were in the hundreds. Hundreds more were executed, while approximately 300 were exiled to Honduras to cut logwood. The uprising has come to be called the ‘Tacky War’, or the 1760 Easter Rebellion. He is regarded as a legend, a folk hero who people in many quarters believe should ascend to the status of national hero for his daring exploits against the colonisers.