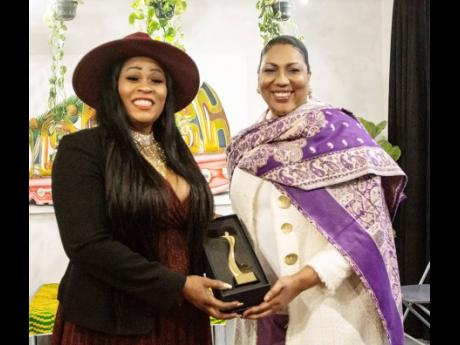 Contributed
Barbara Gayle (left) actress and businesswoman who received the Entrepreneur Award from June Daley organiser of the ‘Our Journey to Success’ event. 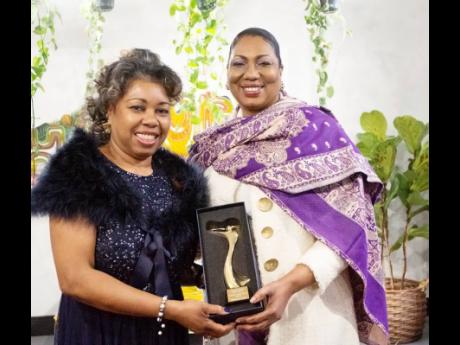 Contributed
Catherine Miller-Smith (left) is presented with the Life Time Achievement Award from June Daley, organiser of the ‘Our Journey to Success’ event.
1
2

The event showcased the talents and inspiring success stories of several women within the black community, who were also leaders in their respective fields. The show also helped to raise much-needed funds to purchase canteen equipment for the Edward Seaga Infant School in west Kingston, Jamaica, which is the chosen beneficiary of the charity.

The sold-out event kicked off with a performance by guest artiste Michael Arkk, who wooed the mainly female audience with popular R&B numbers.

The guests included Zora Johnson, founding director of Soul to Soul Connexions, a bespoke introduction service; Marsha Jones, chief nurse for Nursing and Midwifery Services; and Natasha Veerasawny, a breast cancer survivor and founder of Bonded Thru Cancer, a charity which supports women who experience trauma from surgical procedures related to cancer treatment.

There was a fabulous fashion show and display of African prints and fabric by three siblings known as Akua, Yaw and Nana. They presented a unique collection for the event titled ‘First Love’. Each garment was made from a stunning print which had historical relevance and was made by each of the siblings. The amazing outfits were modelled by friends and family.

The evening was rounded off with an awards presentation to a number of individuals who have contributed their services to the community over the years.

Those honoured included Catherine Miller-Smith, a Lambeth hair salon owner for over 35 years who received the LifeTime Achievement Award; Barbara Gayle, an actress and businesswoman who received the Entrepreneur Award; Barbara Blake Hannah, the first black female TV news presenter in England; May Pinnock, the headmistress for the Edward Seaga Infant School for over 35 years, who was honoured for services in the field of education; and Dr Kurdell Campbell, recognised for her service in the field of medicine.