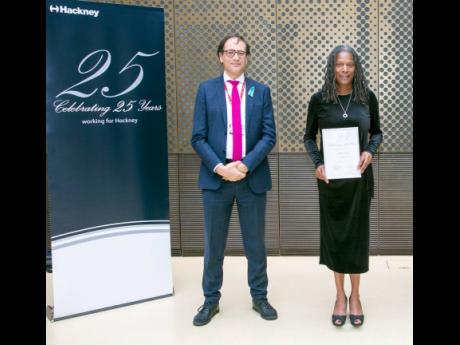 Contributed
Sheila Simon is pictured with Mark Carroll, chief executive of Hackney Council, after she was presented with the Long Service Award. 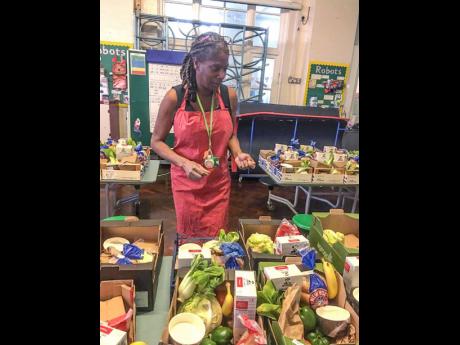 Contributed
Primary school educator, Sheila Simon, at Gayhurst Community School in Hackney, east London where she has taught for 35 years.
1
2

A primary-school teacher was recently recognised in her local council’s Long Service Awards. Sheila Simon, a mother of two adult children from Newington Green, received an award from Hackney Council in acknowledgement of her over 25 years of service as an educator.

Simon, who is of Antiguan and Jamaican parentage, has worked for the past 35 years at Gayhurst Community School in Hackney, east London, where she has taught hundreds of children, many of whom have now become parents themselves with their children attending the school.

She received the award from Hackney Mayor Philip Glanville and Deputy Mayor Antoinette Bramble on Wednesday, March 30. In her response, she said: “This is a special moment for my family. I have given over half my life to education because I love it, and I do not want to stop.”

Diagnosed with dyslexia during her adult years, Simon could not pinpoint why she had struggled at school during her childhood, eventually leaving the system without any formal qualification. But with support from her sister, Susanna – a childcare and social worker – Simon went on to achieve her NVQ Level 3 at Hackney and Islington College before establishing herself as a highly popular primary-school educator within both her school and community.

She identifies persistence and a love for her job as the factors which have kept her going over the years.

“Nothing beats the pleasure of seeing a 40-plus-year-old parent, who I had taught many years before, bring their own child, or children, to our nursery and say that had it not been for my tough approach, they would not be where they are today. My own son, who was later diagnosed with dyslexia and autism, made me reflect on my own struggles as a child, then motivated me to push both him and his sister, who now works as a prison officer, to be the best that they can be and not give up on their dreams.”

Compared to her childhood, Simon says that today’s schools are better resourced to tackle many of the issues with which she and others of her generation struggled. “Today we have special-needs teachers, speech and language therapists, and lots of different staff who have been professionally trained to deal with some of the issues I experienced during my own childhood over 55 years ago, and this is a good thing,” she says.

She also had praises for both the school’s previous head teacher, Diane Roome, and current executive head teacher Louise Nicholls for the opportunity to work at the school, as well as the flexibility she now has been given during her senior years.

At age 60, a time when most employees begin to consider retirement, Simon has no such plans. “Each day I wake up, I am reminded of the privilege I have to work with and make a positive difference in the lives of children, some of whom have special needs, just as I did as a child at school. There is not a day that goes by where I can say that I have not enjoyed the challenge of pushing children of all backgrounds and abilities, and the reward it brings in knowing from the children themselves how much of a difference you have made in their educational life.”

She found it difficult to identify just one fond memory, as she says they were all special.

“Everything has been memorable for me – the professional relationships I’ve built with staff, parents and the community; but more than that, those I’ve built with the children. They’re the reason I go into work every day, and why I will find it difficult to stop when it’s time for me to retire.

“I’ve given more than half of my life to education – I have found my life’s purpose - and when I do eventually retire, I want to be able to look back and say that I really did make a difference to the lives of all those children I worked with, and be a grateful and better person for having done so.”