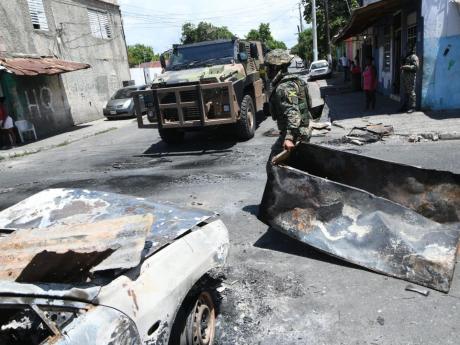 A soldier removes debris from the street amid a protest by Denham Town, Kingston residents today, Angry residents have been protesting Saturday's shooting death of Horaine Glenn by a Jamaica Defence Force soldier on Charles Street. - Rudolph Brown photo

Soldiers have been deployed to sections of Denham Town in West Kingston to remove debris used by residents to block the streets.

Angry residents have been protesting Saturday's shooting death of Horaine Glenn by a Jamaica Defence Force soldier on Charles Street.

The protesters this morning blocked several sections of the community.

Investigations are ongoing into the fatal shooting.

A relative of the deceased said the soldiers were beating her son when Glenn intervened and was shot dead.

"The soldier do him wrong and him should just admit seh him wrong,” said the aunt, who requested anonymity, said in a Gleaner interview on Sunday.

The soldiers said they were spat on by the residents and drinks thrown at them when they tried to accost a resident.

They also alleged that Glenn attempted to disarm a soldier when he was shot.

The residents staunchly deny all claims.