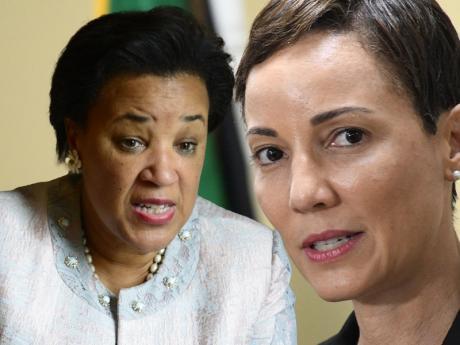 Scotland: “I would be incredibly pleased, as you can imagine it, if Senator Kamina Johnson [Smith] thought again and felt maybe this wasn’t the appropriate time to challenge ... for this post."

Scotland made the call in an interview with ABSTV Antigua.

“I would be incredibly pleased, as you can imagine it, if Senator Kamina Johnson [Smith] thought again and felt maybe this wasn't the appropriate time to challenge a fellow Commonwealth/ Caribbean [person] for this post,” she said.

“You know that I have done six years of my eight-year term. Africa anticipates that they will have an opportunity to put forward an African secretary-general in 2024 when I complete my second term. And at the moment of course, in accordance with tradition, there is no vacancy,” she continued.

“The Government of Jamaica has every confidence in Minister Johnson Smith's abilities to build bridges and consensus, bringing governments and peoples to a common understanding. Her qualifications for the post of secretary-general, including her high moral character, diplomatic and political acumen, proven competence, and commitment to the work of the Commonwealth make her an excellent candidate,” Prime Minister Andrew Holness said at the time of the announcement.

Antigua and Barbuda's Prime Minister Gaston Browne criticised Jamaica's move, labelling it a “monumental error” saying it risks dividing the regional group that gave overwhelming support for Scotland to get a second term.

The current rotation of the top post is for the Caribbean.

Scotland's leadership has been under the microscope since it was revealed that she had circumvented the customary competitive tendering requirement by awarding a lucrative consultancy contract to a friend's company.

The three governments are reportedly not in favour of a second term for Scotland, whose four-year stint ended in March 2020, but was extended because of the coronavirus pandemic.

She has denied the allegations.

In the interview, Scotland said she is grateful for the support of Antigua and Barbuda's Prime Minister and other leaders.

She added that he remains committed to serving the Commonwealth.

The 54-member Commonwealth will have the final say when it meets in June in Rwanda.