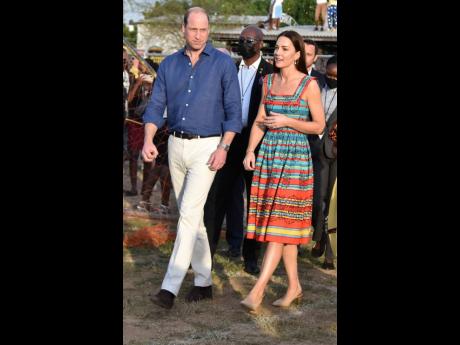 File
The Duke and Duchess of Cambridge visited Jamaica in March as part of Queen Elizabeth’s Platinum Jubilee celebration.

The Government yesterday sought to rectify aspects of a budget released by the Office of the Prime Minister (OPM) which inaccurately itemised an $8-million spend on the visit of the Duke and Duchess of Cambridge last month.

The detailed budget was offered in response to an Access to Information (ATI) request by representatives of the civil society coalition, Advocates Network, days after the royals visited Jamaica in March, as part of Queen Elizabeth’s Platinum Jubilee celebration.

Upon close inspection of the response that went viral online over the weekend, the expenses listed totalled just over $5.9 million; a $2-million shortfall from the total outlined by the OPM.

The responses were received last Friday, according to a letter from the OPM provided by Reverend Father Sean Major-Campbell, of the Christ Church in Vineyard Town, Kingston, and a member of Advocates Network

Yesterday, Robert Nesta Morgan, minister without portfolio in the Office of the Prime Minister, with responsibility for information, blamed unscrupulous individuals for misrepresenting the information provided.

Morgan provided The Sunday Gleaner with an amended budget, which in two rows outlined costs for accommodation, and welfare and hospitality. At costs of $1.351 million and $720,679, respectively, these accounted for the missing funds.

“The person did not post all the pages,” Morgan told The Sunday Gleaner yesterday evening. “There were other items that were not posted (online) by the persons who got the ATI request (responses). They cut off the other page.”

“There are two other items that they did not post,” he said, unwilling to theorise, however, why the budget would have been falsely edited.

According to the updated budget, the accommodation was for: “Accommodation for TRH, two Support Staff for TRH, Support Team for Government of Jamaica (Ministry of Health and Wellness, Jamaica Constabulary Force and Jamaica Defence Force).”

Welfare and hospitality meant refreshments at meetings and hostings.

“This is the first time I am seeing this budget and I have been in direct contact with the OPM,” noted Father Major-Campbell when presented with the amended list by The Sunday Gleaner. His concerns remained the same, however.

“At a time when so many of our children are losing out on best practices and some of the most efficient experiences for more successful outcomes, we must ask, ‘might any such expenditure on the royal visit have been put to better use for Jamaica’s children?’” said the churchman.

“Just imagine the number of basic schools that could do with a flush toilet; those that could do with a resource room; those who could benefit from basic photocopying to help with mitigating learning-loss concerns. Those in need of Internet capacity. How about some extra lessons to much-needed remedial work for two lost years?” he continued.

Morgan was quick to justify the spend, however. “This is one of the lowest costs that we have ever spent on an official visit by anybody. Obama’s visit was significantly more, and several other visits were significantly more,” he said, noting that much effort was placed in reducing the cost.

“When you look at it comparatively, when our leaders go overseas and they have to accommodate them, the costs are significantly higher than what we paid for the royal visit,” he argued.

The visit by former US President Barack Obama cost taxpayers roughly $270 million in 2015.

Morgan listed international exposure among the benefits of the royal visit, but one high-ranking member of the opposing People’s National Party (PNP) had his doubts.

“I’m hard-pressed to identify any specific benefits. The thing (visit) came up fairly suddenly. We were told they were coming, and maybe it might attract visitors from England. I don’t know if they saw that people came and they had a good time, but it became a bit controversial,” said the PNP representative, who asked not to be named.

“There was the whole issue of Jamaica becoming a republic and reparations. So it sort of got enveloped in all of those serious issues. So I don’t know what benefits Jamaica would have derived from it.”