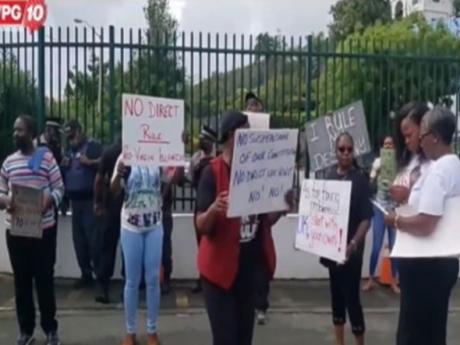 CARICOM has objected to an inquiry's recommendation that the constitution of the British Virgin Islands (BVI) be suspended to allow for direct rule by the United Kingdom (UK) through the governor, John Rankin.

The BVI, a British overseas territory, has been plunged into a political crisis following the release of the governance inquiry's report days after Premier Andrew Fahie was nabbed in the US on drug charges on April 28.

The one-man commission outlined several recommendations including that the BVI government cease to exist in its current format for at least two years.

That means ministerial government and an elected House of Assembly would hold no authority in the territory, and London would call the shots.

It's a proposal that CARICOM said makes it “deeply concerned”.

The regional body said such moves would represent a “retrograde step of restoring direct rule by the governor in council as existed in Her Majesty's colonies during the colonial period”.

“CARICOM supports the BVI government and people in their objection to this recommendation,” the bloc said in a statement today.

It added: “the imposition of direct rule, and the associated history of such imposition in the Caribbean, was never intended to deliver democratic governance or to be an instrument of economic and social development of our countries and peoples.”

CARICOM said suspending the House of Assembly in the BVI and impose direct rule from London would be “inconsistent” with the United Nations Universal Declaration of Human Rights.

CARICOM said it supports the BVI parliament's welcome of the inquiry's recommendation to improve governance, and commitment to work with the UK to addresses weaknesses in identified in the Commission of Inquiry's report.

But it said the people of BVI and their elected representatives have the responsibility to ensure good governance with full transparency and accountability and should work together to achieve “mutually acceptable solutions”.

On Tuesday, people took to the street outside the official residence of the governor to protest the recommendations.

The BVI has been an associate member of the CARICOM since July 1991.