Hesitant teacher tops those who ‘Change the World’ 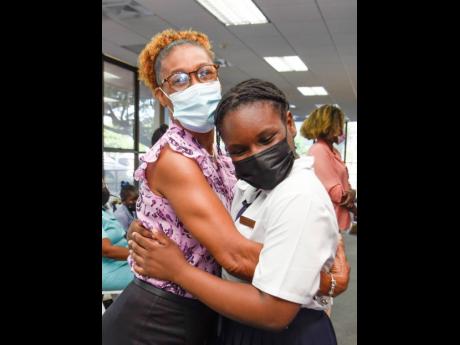 Ann-Marie Stanford, a grade six teacher at Ocho Rios Primary School in St Ann, is a naturally shy person who fears interaction, but her love for children and desire to help them succeed drove her to pursue the profession.

“Teaching has always been a passion since I was a little girl growing up. I enjoy being around kids. Kids were not as scary as adults ... so I thought it was the best profession to get into given my kind of personality,” Stanford blushed during a Gleaner interview on Monday.

However, her anxieties were heightened when her 11-year-old student, Dacia Lobban, chose to nominate her for the Jamaica-based Insurance Company of the West Indies (ICWI) Teachers Change the World Awards as she did not want the publicity.

Stanford’s motherly and selfless impulses overcame her reservations when she learned that Lobban would receive a $20,000 book voucher, which she considered to be extremely beneficial to her if her entry had made it into the competition’s top five.

That bold step landed her the first-place prize of $100,000 on Monday.

In April, ICWI encouraged its customers’ children from the primary, preparatory, and high-school levels to nominate a teacher by submitting an essay outlining they had been helped academically during the punishing COVID-19 pandemic.

The Teachers’ Day initiative rewarded three of the five shortlisted teachers for their contribution to nation building after tallying the scores from social-media platforms that allowed the public to vote.

The second-place prize of $75,000 went to Gaylia Gayle of Marcus Garvey Technical High School in St Ann, while Patricia Gillings of Muschett High in Trelawny won $50,000 for third.

Students who submitted winning submissions will also receive book vouchers valued at $20,000 each courtesy of ICWI.

President of ICWI, Paul Lalor, commended the teachers for finding innovative ways of engaging students despite being “locked away behind screens”.

“Teachers really do have the power to change the world, and therefore it’s important that we celebrate with them, encourage them, acknowledge the work that they have done to make sure that our kids, our future leaders, our clay, are moulded into the right shape and form to make sure that our country and the world go forward,” Lalor said.

Stanford said that reading Lobban’s essay was an emotional experience.

“I’m a teacher that gives everything to my students in need and to be recognised in this way, it was very rewarding,” she said while trying to fight back tears.

An excerpt from Lobban’s essay raved about Stanford’s capacity to go beyond the call of duty, praising the teacher’s commitment that helped her to not give up on her studies.

“Online learning was very difficult at first, but Ms Stanford made the impossible seem possible from the very beginning. She ensured that she did a lot of revision, which helped us to grasp the concepts,” the essay read.

Denise Rose, Lobban’s mother, said that the bond Stanford created with her daughter, by being her mathematics, science and form teacher, had proven to be instrumental in her child’s development.

Since Lobban came under Stanford’s wing, she moved from being a grade B student to receiving As.

Stanford said that the switch to online classes was difficult, as she loved to engage with her students.

She recalled moments where she would give a pat on the back or an encouraging nudge to the shoulder to offer support to students, but the pandemic robbed her of those simple pleasures.

“A lot of the children were out there [and] we did not know what was happening to them. When we are face to face, some of these children would depend on us as teachers to feed them, to be a mother to them, and so on, and so I was very worried what had happened to these children who we were not there for,” she said.