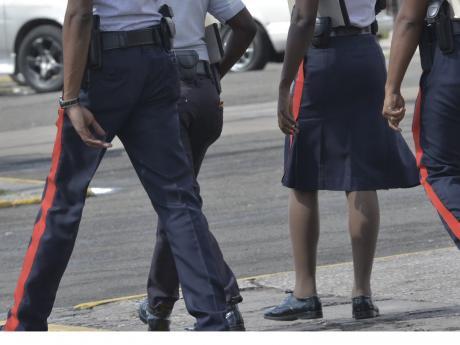 Weston: "We appreciate that they have a very stressful job and they do it on behalf of us the citizens and we would like to know that we have given them something that will relieve their stress, if not enhance their health."

When a group of citizens approached the Matilda's Corner Police in St Andrew last June to gauge how they could improve conditions for the cops assigned there, the response from the commanding officer was swift.

Inspector Earle Grant, who took command of the station in January 2020 amid the outbreak of the Coronavirus, jumped at the chance to put in place the gym he had long contemplated.

The offer came from the Golden Triangle Neighbourhood Association (GTNA), which represents residents served by the station.

Eleven months later, through donations from a number of businesses in the area, a new $7 million gym with modern equipment has replaced the makeshift facility and weights the cops were using.

The Police High Command gave approval for the gym to avoid ethics concerns, Grant and the GTNA disclosed.

“Seeing the makeshift gym that they had under the mango tree and then seeing the police officers walking around the compound doing laps just to keep fit…all of those things motivated me,” said Grant.

Shelly Weston, president of the GTNA, said the project was “quickly embraced” by the community group and corporate citizens mainly because of the improved relationships between the police and residents.

“The jurisdiction that falls under Matilda's Corner has seen a dramatic improvement in the quality of policing,” said Weston.

“We appreciate that they have a very stressful job and they do it on behalf of us the citizens and we would like to know that we have given them something that will relieve their stress, if not enhance their health.”

And she wants other community groups to follow GTNA's lead, even if it's not a gym.

“I certainly would like to see it replicated. There is a lot of disharmony between citizens and the police and things like this can improve the harmony,” said Weston.

Grant, who was assigned to the Matilda's Corner Police Station as a Constable over a decade ago, said the idea of a gym for the men and women under his command is something he has been toying with for a long time.

The mental and emotional toll from the COVID-19 outbreak made it even more urgent, he noted.

“I was trying to figure out how best to go about getting it up and running,” he said during an interview with The Gleaner on Thursday.

“So, when they approached me...that's when I said we need a gym.”

Cops at the Matilda's Corner Police Station are “overwhelmed” by the gesture, said Grant.

“For the most part they are saying to me 'Inspector, we feel better, we feel so refreshed, we feel so empowered when we come to work',” he said.

Because of COVID protocols, the gym will be confined to cops at the Matilda's Corner Police Station, but could be extended to those across the wider St Andrew Central Division, Grant said.