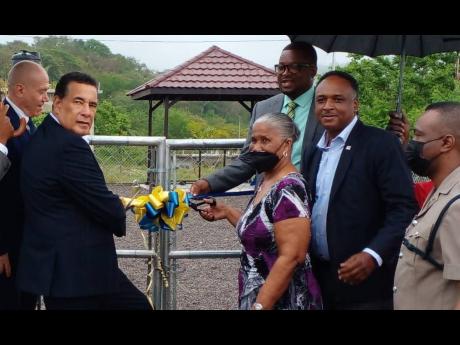 The Jamaica Social Investment Fund (JSIF) on Thursday officially opened a $4-million park and green space in the crime-stricken community of Salt Spring in St James.

The project, which was financed by the European Union, is expected to promote outdoor activities and active lifestyles while increasing social interaction and exchange among residents in healthier urban conditions for good physical and mental well-being.

JSIF Managing Director Omar Sweeney told The Gleaner that the development of the space demonstrates the agency’s ongoing commitment to transforming vulnerable communities across Jamaica.

“Since JSIF’s inception in 1996, it has endeavoured to transform undeserved communities into space where residents can enjoy a better quality of life,” Sweeney stated. “To this end, the JSIF has been partnering with the residents and other stakeholders of this community, since 2020, through financing from the Government of Jamaica’s Integrated Community Development Project II, to deliver service to improve their living conditions and their perception of safety.”

Among other initiatives in Salt Spring in recent years are the award of enterprise grants to 45 microenterprises; hosting of two summer camps; and the construction of a safe passage area at the Salt Spring Primary and Infant School, which was completed and handed over just four months ago.

Aniceto Rodriguez Ruiz, head of cooperation at the Delegation of the European Union to Jamaica, was pleased with the high standard of work being carried out by JSIF, noting that such investments were key to reducing crime in communities and steer children and youth away from gangs.

“The European Union is partnering with the Government of Jamaica and is providing direct financial support and technical assistance. Now we have funded €20-million, which is J$3.4 billion, towards our budget-support programme in supporting citizen security.”

He said this will allow for more social-development interventions in vulnerable communities such as Salt Spring, which has been among the most violent communities in St James.