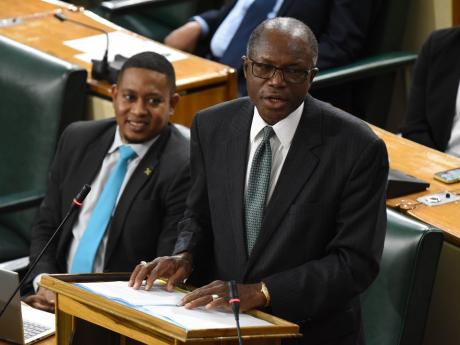 Minister without Portfolio in the Ministry of Economic Growth and Job Creation, with responsibility for Works, Everald Warmington. -Contributed photo.

The Ministry of Economic Growth and Job Creation is moving to regularise settlements occupied by more than 120 households in Kingston and St Andrew and St James.

Minister without Portfolio in the Ministry of Economic Growth and Job Creation, with responsibility for Works,  Everald Warmington, said that the Land Administration Management Branch will be taking steps to acquire six properties in the Kingston 6 area, which were declared under the Local Improvements (Community Amenities) Act.

In addition, 12 upgraded properties in Stanville, Kingston 6 will be acquired to regularise more than 300 households.

This is in addition to seven properties in Bottom Pen, Montego Bay, which were partially upgraded, to regularise more than 500 households.

Warmington was making his contribution to the 2022/23 Sectoral Debate in the House of Representatives on May 11.

Meanwhile, he told the House that approximately 30 surveys will be conducted at a cost of $38 million, 23 of which are subdivision surveys, to facilitate the issuance of 735 new certificates of title.