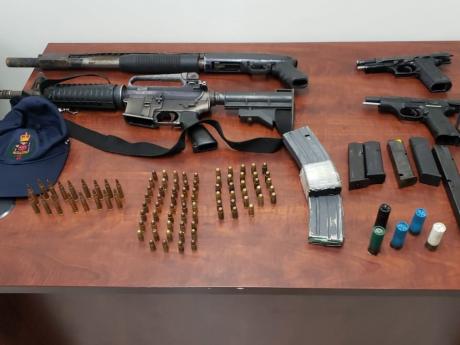 Head of the St Catherine North police, Senior superintendent Howard Chambers says the police have increased their presence in the Linstead sub-division.-Contributed photo.

Two high-powered weapons were among four guns and 89 assorted rounds of ammunition seized by the St Catherine North police in Linstead on Friday.

In addition, the police seized two semi-automatic pistols and 44 rounds of ammunition.

Head of the St Catherine North police, Senior Superintendent Howard Chambers, said shortly after midday, a joint police-military team was on patrol in Commodore district when a man was seen acting in a suspicious manner.

“Upon reaching a particular section of the community they saw a man behaving in a way that aroused the suspicion of the team. So, the team tried to accost this man, who ran off with a large duffle bag. As soon as the team was near to him, he dropped the bag and ran,” said Chambers.

“We called in additional support to help canvas the area and help search for this man, but efforts were futile. However, upon searching the bag, we found four firearms…plus a blue baseball cap marked 'police',” Chambers continued.

He said the police will not relent in their efforts to bring normalcy into the division.

He noted that the police have increased their presence in the Linstead sub-division.

Chambers is calling for law-abiding residents to continue to cooperate with the police.

“Whenever you see any strange persons operating in your community call the police, let us check them out.”