Salary consultations with unions to conclude in 6 months, 'no worker will be worse off' - Finance Minister 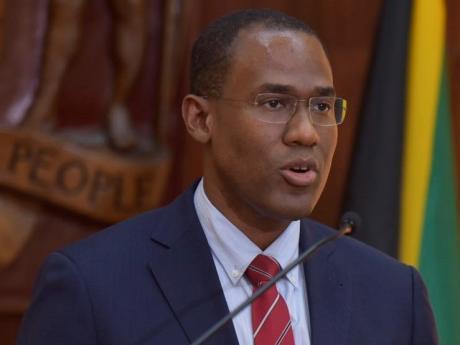 Clarke: "I appeal to all public sector employees for patience and for calm"

Finance Minister Dr Nigel Clarke says consultations with unions over the restructuring of compensation for government workers should be wrapped up within the next six months.

He gave the update in a national address this evening as he warned of dire consequences such as job cuts if there are further strikes by government workers.

Last week, air traffic controllers and employees of the National Water Commission and the National Housing Trust took industrial action. At the last moment, one of the largest unions, the 30,000-strong Jamaica Civil Service Association (JCSA) withdrew a notice to take industrial action this week after a meeting with Clarke.

More than 95 per cent of the water agency's customers were affected, and the county's airspace was effectively closed Thursday, imposing likely heavy costs on the tourism industry.

Clarke said given the "huge scope" of the compensation review, the ministry decided to conclude first with central government employees such as civil servants, teachers, the police, nurses, among others, and then move to employees attached to public bodies.

He pointed to several public bodies where concerns are because of a lack of engagement so far: Passport, Immigration and Citizenship Agency; Petrojam; National Water Commission; National Irrigation Commission; Broadcasting Commission of Jamaica and Jamaica Civil Aviation Authority.

"Though this timeline may seem far away, I ask you to consider that such a comprehensive reform with respect to public sector compensation... has never happened before. We have been ambitious in looking after your interest. We therefore ask for patience," Clarke said.

The compensation review involves 110,000 employees organised into 47 bargaining units and spread across 140 public bodies.  Meetings have been held with 45 of the bargaining units so far, the minister said.

"Please take us at our word, that no public sector employee will be worse off," Clarke said, admitting the possibility that "there could be cases where the proposed changes lead to less net pay".

But he said if it comes to that, "we will work to find a fix."

Several unions have accused the Ministry of Finance of poor communication, with the JCSA arguing that it has been disrespected when letters to the Financial Secretary Darlene Morrison are met with responses from her juniors.

Clarke's address follows a call Friday from the Private Sector Organisation of Jamaica for patience from workers, and transparency from Andrew Holness administration, which is facing its first major industrial crisis since taking office in 2016.

Amid his repeated begging for patience, the Finance Minister outlined that it would against the interest of workers to take action that could derail economic recovery in jobs and tourism, especially after the hit from the COVID-19 pandemic.

"This much needed economic recovery can easily be interrupted and reversed if services are disrupted due to industrial action," he said.

"Such a reversal would set Jamaica back tremendously, costing jobs. This would negatively impact us all; from the decline in government revenue that would follow and the cuts in government expenditure that would then become necessary. Jamaica cannot afford this. I appeal to all public sector employees for patience and for calm," added Clarke, echoing similar urgings from Prime Minister Andrew Holness.

"We know that you have been awaiting a long time for the compensation restructuring reform and many are now anxious," he said, noting that there may be "some misunderstanding" by workers because of incomplete information on the process.

He said they should await the outcome of the consultative process between the unions and the government.

The Finance Minister was clear, however, that the "complex and ambitious reform" in how public sector workers are paid is necessary.

He has argued that the reform will create a new compensation system that is simple, fair, consistent, transparent, efficient, fiscally sustainable and that better allows the Government to attract and retain the talent needed to run a modern bureaucracy.