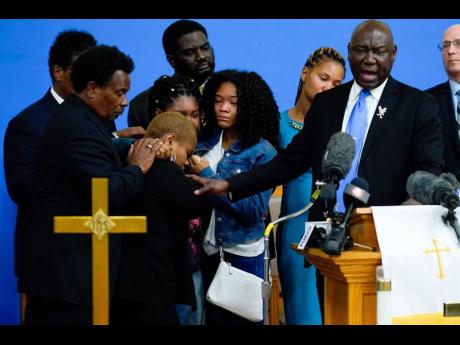 Attorney Benjamin Crump, right, accompanied by the family of Ruth Whitfield, a victim of shooting at a supermarket, speaks with members of the media during a news conference in Buffalo, N.Y., Monday, May 16, 2022. (AP Photo/Matt Rourke) 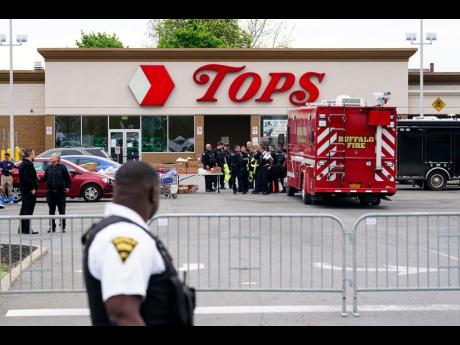 Investigators work the scene of a shooting at a supermarket, in Buffalo, N.Y., Monday, May 16, 2022. While law enforcement officials have grown adept since the Sept. 11 attacks at disrupting well-organized plots, they face a much tougher challenge in intercepting self-radicalized young men who absorb racist screeds on social media and plot violence on their own. (AP Photo/Matt Rourke)
1
2

BUFFALO, N.Y. (AP) — The white gunman accused of massacring 10 Black people at a Buffalo supermarket wrote as far back as November about staging a livestreamed attack on African Americans, practiced shooting from his car and traveled hours from his home in March to scout out the store, according to detailed diary entries he appears to have posted online.

The author of the diary posted hand-drawn maps of the grocery store along with tallies of the number of Black people he counted there, and recounted how a Black security guard at the supermarket confronted him that day to ask what he was up to. A Black security guard was among the dead in Saturday's shooting rampage.

The diary taken from the chat platform Discord came to light two days after 18-year-old Payton Gendron allegedly opened fire with an AR-15-style rifle at the Tops Friendly Market. He was wearing body armor and used a helmet camera to livestream the bloodbath on the internet, authorities said.

He surrendered inside the supermarket and was arraigned on a murder charge over the weekend. He pleaded not guilty and was jailed under a suicide watch. Federal authorities are contemplating bringing hate crime charges.

Copies of the online materials were shared with The Associated Press by Marc-André Argentino, a research fellow at the London-based International Centre for the Study of Radicalisation and Political Violence.

A transcript of the diary entries was apparently posted publicly sometime ahead of the attack. It was not clear how many people might have seen the entries. Experts said it was possible but unlikely the diary could have been altered by someone other than the author.

The FBI's top agent in Buffalo, Stephen Belongia, indicated on a call with other officials Monday that investigators are looking at Gendron's Discord activity, citing posts last summer about body armor and guns and others last month in which he taunted federal authorities. Belongia gave no give details in the call, which the AP obtained.

But in an April 17 post apparently by Gendron, he exhorted readers to kill agents from the FBI and Bureau of Alcohol, Tobacco, Firearms and Explosives.

Messages seeking comment were left with Gendron's lawyers. No one answered the door at his family's home.

The violence spread grief and anger in Buffalo and beyond.

Former Buffalo Fire Commissioner Garnell Whitfield Jr., who lost his 86-year-old mother, Ruth Whitfield, in the shooting, asked how the country could allow its history of racist killings to repeat itself.

“We're not just hurting. We're angry,” Whitfield said at a news conference with civil rights attorney Ben Crump and others. “We treat people with decency, and we love even our enemies.”

“And you expect us to keep doing this over and over and over again — over again, forgive and forget,” he continued. “While people we elect and trust in offices around this country do their best not to protect us, not to consider us equal.”

The victims also included a man buying a cake for his grandson; a church deacon helping people get home with their groceries; and a supermarket security guard.

The online diary details a March 8 reconnaissance visit the writer made to Buffalo, about 200 miles (320 kilometers) from Gendron's home in Conklin, New York.

Buffalo Police Commissioner Joseph Gramaglia said at a news conference that there was information indicating Gendron was in Buffalo in March, but Gramaglia declined to say more.

“There's a lot of social that's being looked at, or that's being verified, captured,” Gramaglia said. “Some of that takes warrants that have to be served on various social media platforms.”

The author of the diary talked about checking out targets including the Tops Friendly Market and said a security guard asked what he was doing after his second visit of the day. He gave an excuse about collecting data and soon left — “a close call,” he wrote.

A 180-page document purportedly written by Gendron said the attack was intended to terrorise all nonwhite, non-Christian people and get them to leave the country. Federal authorities said they are working to confirm the document's authenticity.

Gendron had briefly been on authorities' radar last spring, when state police were called to his high school for a report that the then-17-year-old had made threatening statements.