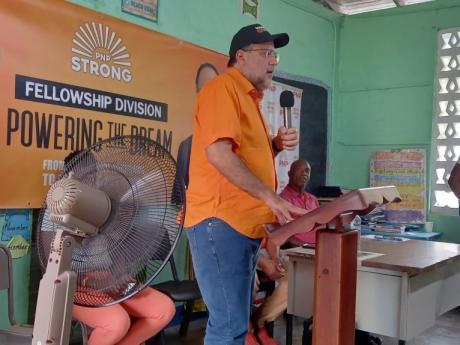 Opposition Leader Mark Golding is warning that harsher times are ahead for Jamaicans and says the government must step in to cushion to blow.

Golding, addressing a People's National Party (PNP) divisional conference in Portland on Sunday, argued that Jamaicans continue to be impacted by the fallout from the pandemic.

He accused the government of not doing enough.

“This is not the year to be so tight with the thing. This is a year when sufferation is going to be bitter on the people. Government has an obligation, a duty to cushion the crises for the people,” Golding said.

“It is not beyond the government to do that, but dem never listen. And I can tell you what you see happening now with the industrial unrest is partly because of those things, because the pressure is on public sector workers. And the process to bring in this reclassification of their employment arrangements and their salary is being done in a way that don't build no confidence. It is being done in a way that has eroded trust in the process and in the government.

“Unions representing the public sector workers have been complaining that they have not been getting the information in a timely basis, and they are not being brought to the table to negotiate any of those details around the package. And here we have last week strike; water commission strike, housing trust strike, air traffic controllers strike, all in one week. And who next? So it is a bitter time. The people are going to be looking for an alternative to this government,” Golding asserted.

He argued that the PNP stands ready as a viable alternative to lead the country forward.

Golding argued that as a result of the tough times crime will increase as unattached youths will be looking for an alternative to make a better life.

“We can't solve those issues (crime) with states of emergency and repressive laws that take away the rights of the people. So the people will be looking for an alternative and it is for us in the People's National Party to show that we are ready. We have a good team and we just need to show Jamaica that we have a good team and that our team is pulling together and that we have the ideas and the policies and the programmes that can deliver for the people.

“I am telling you that the next PNP government must focus on both wealth creation for the people, but also delivering Jamaica out of some of the wicked social problems that cause us to have so much crime and violence in the country. Our primary school system and our basic school system are not delivering quality education to all our children. Some children are doing well, many children are not. It's not that they are dunce, but it's just that the way in which the system is organised,” he concluded.