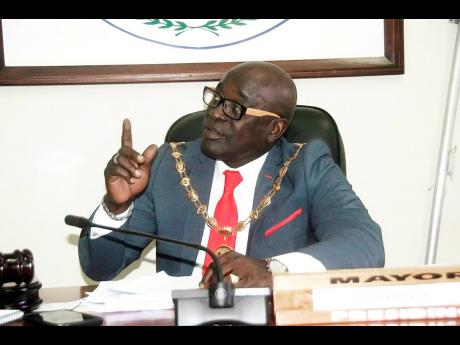 THE POLITICAL directorate at the Hanover Municipal Corporation (HMC) is putting plans in place for the implementation of a staff improvement programme to begin later this year.

According to Mayor of Lucea and HMC Chairman Sheridan Samuels, the project should be in place by September the latest.

Dubbed the ‘Mayor’s Staff Upliftment Programme’, The Gleaner was told that the objective is to aid at least two members of staff of the HMC to achieve additional academic qualification annually, which should be able to assist them in improving their status at the workplace.

“We have come to realise that there are members of staff at the corporation that if they could acquire a little more qualification, they could move on to a higher level within their employment. So we have seen it fit to assist in empowering them in creating a work-and-study environment for them,” Samuels told The Gleaner.

While there is a study programme in place for civil servants, not all category of workers within the civil service are able to access that programme, because of varying reasons. Information reaching The Gleaner is that the HMC programme will be open to all categories of workers, for all levels of education and other benefits.

With seven parish councillors elected to sit in the HMC, three representing the Jamaica Labour Party (JLP) and four representing the People’s National Party (PNP), Samuels told The Gleaner that all are in agreement and have committed to give their full support.

“The idea came first from the Deputy Mayor and was sold to the other councillors, and they decided on the naming for it, ‘The Mayor’s Staff Upliftment Programme’,” he stated.

Samuels said it was decided that the programme should also include the well-being of workers.

“It does not just stop there; it is broader than just education. Outside of educational opportunities, there are different areas, because a member of staff may encounter some hard times, his or her living conditions may deteriorate. So we are looking at all those aspects because within the system, even though we (at the HMC) provide such service to the general public, members of staff do not readily have access to such service,” Samuels said.

He said that innovative ways have been identified to assist the funding of the programme.

“We are looking at fundraisers; and in the same breath, we will go out there and seek assistance from the general public,” he noted.

Samuels also mentioned other fundraising activities, which will be proposed to the staff sports club, that can support funding.

One member of staff at the HMC, who wished not to give their name, said the programme would encourage staff to be more committed and loyal. She told The Gleaner that she would like to further her studies, and if she can remain in her job while embarking on her study, that would be of immense benefit.