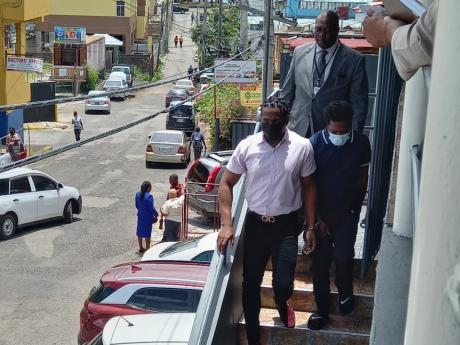 Andre Bromfield (front left) being led away from the Manchester Circuit Court after pleading guilty to manslaughter on Monday. -Tamara Bailey photo.

A former Manchester delivery supervisor who shot and killed a 24-year-old woman he said disrespected him after allowing another man to kiss her has pleaded guilty to manslaughter.

Andre Bromfield entered the plea when he appeared before the Manchester Circuit Court yesterday.

He was initially charged with murder following the incident at the Master Mac Supermarket in the parish two years ago.

Sentencing is set for Tuesday, May 31.

It is reported that on December 31, 2019, Shantell White, who was employed at the supermarket as an inventory clerk, along with Bromfield and others, were in the lunchroom when she was greeted by another male colleague who kissed her on the cheek.

Following a statement reportedly made by White that the kiss should have been on her lips, Bromfield, in a bout of rage, reportedly got up from his chair, pulled his licensed firearm from his waist, and shot the woman. He then ran from the room.

White sustained a cranial cerebral injury from multiple gunshot wounds to the face, according to medical records provided to the court.

Bromfield, who surrendered to the police on January 1, 2020, and was subsequently charged with one count of illegal possession of firearm and one count of murder, pleaded not guilty to both counts.

The court later reduced the murder charge to manslaughter after Bromfield indicated in his caution statement that he was provoked by White.

"Me take up this girl and give her everything, build her all two-bedroom house, pay off her credit card and me realise say she have another man... Me see this youth a kiss kiss her up and me talk to her and she a diss me up. Me just snap."

With a reduced charge, Bromfield's attorney, Norman Godfrey, sought to find out the sentencing indicator.

However,  presiding judge Lorna Shelly-Williams said she would be following the sentencing guidelines for the offence.