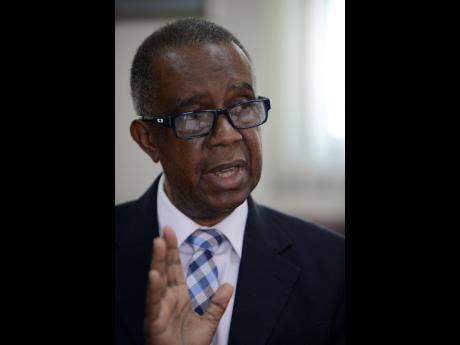 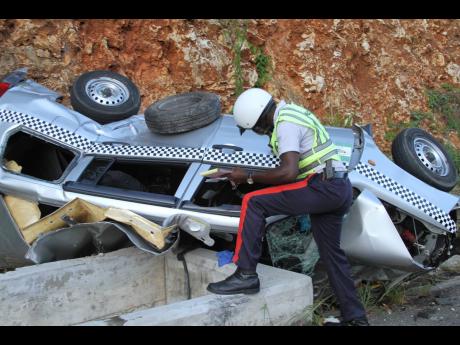 Nathaniel Stewart/Photographer
A policeman views the wreckage of a Toyota Probox taxicab that was involved in a three-vehicle crash along the Chapelton main road in Clarendon in May 2021.
1
2

The number of road deaths due to traffic crashes is at 167 as at Saturday, compared to 172 for the corresponding period last year, when Jamaica recorded an all-time high of 487 road deaths.

Jones further disclosed that the projection is for 482 people to be killed on our roads by year end.

“This is an absolute national disaster. This is unacceptable in a country of barely three million people,” the medical practitioner told the prayer breakfast at the Boulevard Baptist Church, hosted by the Transport Operators Development Sustainable Services (TODSS) under the theme ‘Partnership for Peace on our Roads’.

It is one of the activities being observed locally in keeping with the United Nation’s Global Road Safety Awareness Week. Other activities being hosted by TODSS include a safety, security, standards and investment seminar at the Technology Innovation Centre, University of Technology, on Wednesday, while a transport operators safety community intervention explosion is slated for Buff Bay, Portland.

Jones explained that when the NRSC was started in 1993 and given a parliamentary mandate to coordinate all road safety activities, road fatalities stood at an average of 400 each year.

“All the stakeholders working together, we managed to get to the number down to 260 in 2012 and every year since then, it has been going in the wrong direction,” he lamented. “The second leading cause of violent deaths in this country… So, I am very pleased, Mr (Egerton) Newman, that you have organised this event in the context of a prayer breakfast, because we do need divine intervention in this country.”

He continued: “It is a key message being sent by TODSS this morning that we should hold a meeting on road safety in the context of a prayer breakfast. Because the word of God says to us: ‘Except the Lord build the house, they labour in vain that build it: except the LORD keep the city, the watchman waketh but in vain’.

“This is a key message that needs to ring out across Jamaica in this time of road fatalities and murder and water lock-offs and all kind of other ‘striking’ things happening.”

The vice-chairman of the NRSC further advised his audience that Prime Minister Andrew Holness, who chairs the NRSC, had adopted what is now the policy directive for most of its work – the safety systems approach to road safety. This, he explained, was a comprehensive system which took into consideration one main fact: people will make mistakes. However, when they make mistakes, a system must be in place to ensure that the mistake does not lead to death and injury.

“So you have safe roads, safe road users, safe speeds, which is a key part of the whole thing, and safe vehicles and an efficient post-crash system. When we put everything together, you have a system and life support systems that are not about a knee-jerk reaction to a problem today and problem yesterday and a problem tomorrow. Life is about putting in place systems and when systems are functioning properly, then we have some peace on our roads and people won’t die and be injured and we won’t have to be talking about this second cause of main violent deaths in the country.”

Jones also welcomed the fact that the prime minister has appointed minister without portfolio in the Ministry of Economic Growth and Job Creation, Floyd Green, to work with the NRSC.