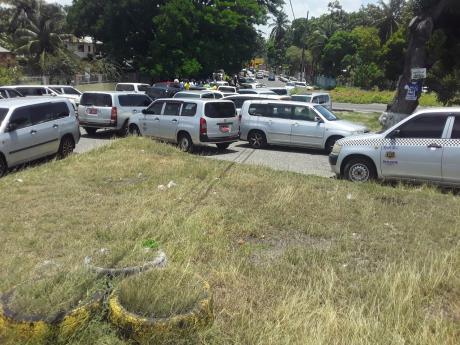 Upset taxi operators parked along St John's Road in St Catherine to protest the seizure of vehicles by the authorities. -Rasbert Turner photo.

Upset taxi operators today mounted a protest along St John's Road in Spanish Town, St Catherine over the seizure of vehicles by the authorities.

The Gleaner was informed that operators of public passenger vehicles have had their cars seized for operating contrary to their road licences.

According to the protesting cabbies, at least 20 vehicles have been seized.

“We need for the Transport Authority to give us a meeting on how best to solve the problem," said Brenton Major.

A police team has since been deployed to the scene to clear the protest and regulate traffic.