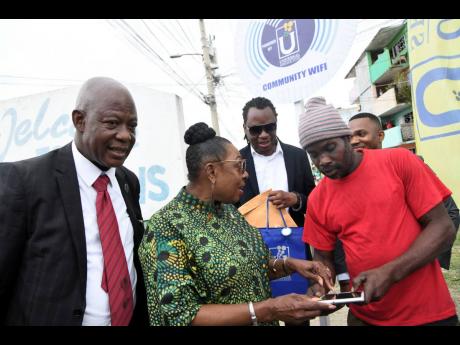 Sixty-five-year-old Ethel Lawrence has been living in Tawes Meadows for most of her life and has been spending up to $1,000 weekly on cell phone data to pass on to her granddaughter to complete her schoolwork.

Fast-forward to Friday, May 13, she and her family were among residents of central St Catherine who now have unlimited access to the Internet courtesy of the Universal Service Fund (USF).

She’s thrilled that her granddaughter can now be more independent in conducting research.

“Sometimes it is very difficult to find the money. The service will help to make children be more productive as they can concentrate on learning instead of where the next phonecard is coming from,” said Lawrence in a Gleaner interview.

“This is great for the community, as technology is the way forward,” she added.

The USF has committed to establishing Wi-Fi hotspots in three communities in each of the 63 constituencies. Increased access now sparked a transformation in the lives of residents in Tawes Meadows and neighbouring Ellerslie Pen.

“I want to let you know that you’re special, as this is the first of our programmes that we have two neighbouring communities getting instalment at the same time,” said Dawes, adding that the St Catherine Central member of parliament had insisted that Tawes Pen could not have got free Internet access without Ellerslie Pen benefiting, too.

More than $10 million was expended in the double Spanish Town project; the hotspot can accommodate up to 200 users at any one time from a radius of 200 metres.

Over at Ellerslie Pen, residents were equally appreciative of their new-found opportunity to browse the Internet and do various academic and other engaging projects

“Right now the children dem will have to deal with the schoolwork as dem get the access free, it is a very good look fi Ellerslie and we love it,’’ she added.

Meanwhile, Member of Parliament Olivia Grange implored the residents to care for the new facility and for users to leverage it for educational means and not for cybercrime.

“We are very thankful to the USF for giving the constituency this assistance, as we are very proud that we have lawyers, doctors, teachers, business executives, and other productive individuals born and raised in these two communities. Therefore, the empowerment of this sort can only improve and add to that cadre,’’ Grange said.

Grange told the gathering that other areas such as Gordon Pen and Irish Pen in the Central St Catherine constituency will benefit from similar services soon.