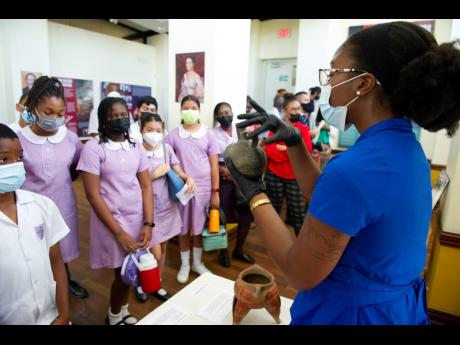 Ricardo Makyn/Chief Photo Editor
Ria Rudduck, assistant curator of the Simon Bolivar Cultural Centre in downtown Kingston, displays an exhibit to students during a tour on Wednesday. The centre celebrated the 207th anniversary of Bolivar’s arrival in Jamaica.

The Institute of Jamaica partnered in Wednesday's commemoration of the 207th anniversary of the arrival of Simón Bolívar, the South American freedom fighter, who is memorialised by a cultural centre in downtown Kingston.

Bolívar, who is dubbed 'El Libertador', for his advocacy and influence in liberating other territories on the continent, including his native Venezuela in 1813.

Bolívar, a former military and political leader of the Republic of Venezuela, travelled to Jamaica in 1815.

He lived at the corner of Tower and Princess streets until his departure in December that year.

While residing in Jamaica, he wrote the famous 'Jamaica Letter' in September, articulating his views on the need for unity, solidarity, safety, and freedom for the people of South America and the Caribbean.

A soldier and politician, Bolívar died in Santa Marta, Colombia, in 1830 at age 47.

José Antonio Sánchez Vegas, charge d'affaires at the Venezuelan Embassy in Jamaica, said the event turned the spotlight on “a very important moment in time”. He said that Bolívar's fight not only helped secure freedom for Venezuela but in Panama, Colombia, Ecuador, Bolivia, and Peru.

Sánchez Vegas explained that “the fact that our national leader, our national hero, came and lived in this country and he had the possibility to write that letter in this island, it is very important for us to commemorate and to celebrate at any occasion where we can be able to do it”.

Students of Genesis Academy and Sts Peter and Paul Preparatory were also invited to be part of the celebrations.

Wednesday's tour of the Simón Bolívar Cultural Centre, held on International Museum Day, unveiled relics from the 1800s as well as a series of informative, interpretive panels highlighting aspects of Bolívar's life, philosophy, and politics.

Sánchez Vegas told The Gleaner that he was pleased that schoolchildren took up the invitation to be educated about the Latin American liberator. He added that it was always “important to know where we are coming from in order to understand the future”.

Myrtha Désulmé, president of the Haiti-Jamaica Society; Vivian Crawford, executive director of the Institute of Jamaica; and Nadine Boothe-Gooden, centre manager at the Simón Bolívar Cultural Centre, were among the other speakers at the event.