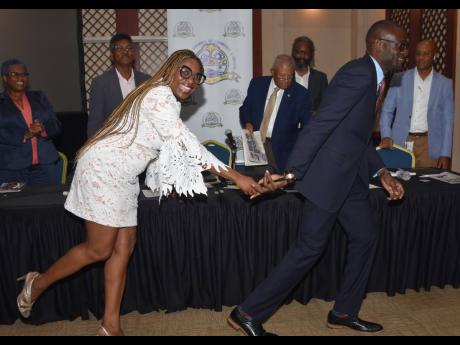 Ashley Anguin/Photographer
Immediate Past President Janet Silvera passes the baton to Oral Heaven, newly installed president of the Montego Bay Chamber of Commerce and Industry, at the organisation’s annual general meeting at the Montego Bay Convention Centre in Rose Hall, St James, on Wednesday, May 18.

Oral Heaven, the newly appointed president of the Montego Bay Chamber of Commerce and Industry (MBCCI), intends to meet with the western city’s stakeholders on formalising and continuing ongoing development initiatives as he settles into office.

During his inaugural address on Wednesday at the MBCCI’s annual general meeting, Heaven pinpointed continued advocacy for the restoration of the Cornwall Regional Hospital (CRH) and installation of JamaicaEye-linked surveillance cameras among priorities for his administration.

“The CRH is there for all of us, and we want to see that hospital returned to being a first-world Type A hospital. There is a rehabilitation oversight committee on which I serve, and we, the members of that committee, will ensure that the work on the hospital is done in the 30 months that we were promised by the minister of health and wellness,” Heaven said. “Also, our members are ready and willing to work with JamaicaEye to curtail crime. That dialogue will continue, and, of course, we have to get it done.”

The projects have been long-standing issues that the MBCCI has sought to resolve.

Last month, the chamber hosted a telethon to raise $50 million for much-needed equipment for the hospital, which has been undergoing restorative work since noxious fumes forced the relocation of its services in 2017. Earlier this week, the MBCCI donated an additional $5 million to the hospital.

There has been concern that the managers of the JamaicaEye public surveillance system have not met with the MBCCI since the idea was first pitched to business leaders in the western city in 2018.

Heaven said that in moving to advance his plans, he would be engaging a number of Cabinet ministers, including four serving as members of parliament in St James – National Security Minister Dr Horace Chang; Tourism Minister Edmund Bartlett; Minister of Legal and Constitutional Affairs Marlene Malahoo Forte; and Homer Davis, state minister in the Office of the Prime Minister.

“The stakeholders [also] include members of the community; leaders of various agencies; our small, medium, and large business leaders; our police; and our mayor

Heaven had served as first vice-president of the MBCCI in the administration of his predecessor, Janet Silvera.