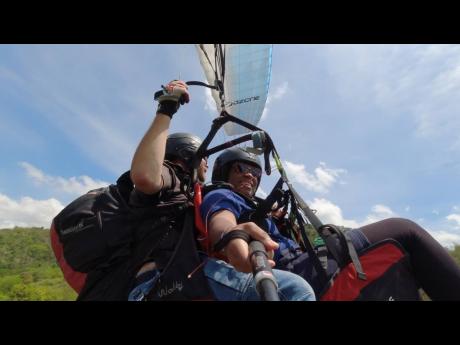 Contributed
Gleaner reporter Asha Wilks on her first paragliding experience with veteran paragliding pilot Ingo Hillman, co-owner of Paradise Wings, on April 30. The pair took off from a section of Skyline Drive in St Andrew and landed at Papine High School. 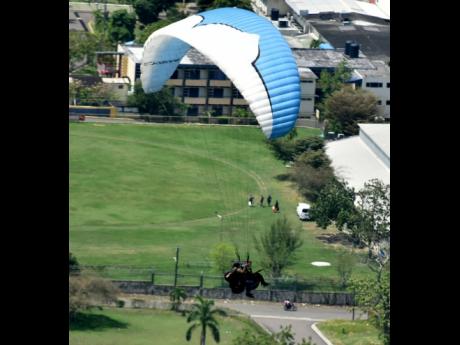 Kenyon Hemans
Gleaner reporter Asha Wilks is given her fist paragliding session by Ingo Hillmann, paragliding pilot for over 22 years and co-owner of Paradise Wings. The paragliding company Paradise Wings Jamaica conducts paragliding trips for people who are willing to try something different. 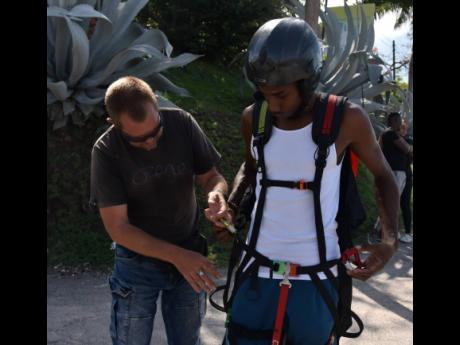 Kenyon Hemans
Fabian Grierson, winner of Paradise Wings’ competition on Instagram, prepares for his first flight as he receives instructions from Ingo Hillmann, paragliding pilot for over 22 years and co-owner of the company. 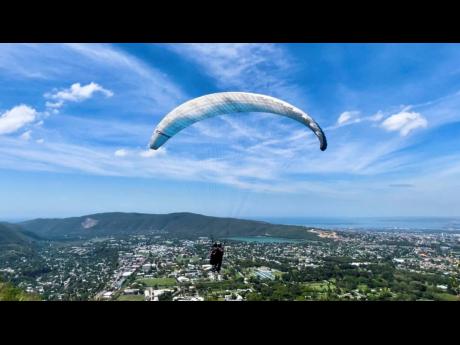 It all began when a small group of friends took flight, paragliding in Malvern, St Elizabeth, at a height of 1,500 feet above ground for leisure. This piqued Martina Seiveright’s attention, who initially had a fear of heights, but always wanted to sky dive, and was lured into trying paragliding instead.

“We do it one time, it was nice. Really different [and] free because you inna di open air,” she expressed.

Two years after this experience of soaring through the open sky using a flying parachute (known as a parasail), Seiveright was captivated and decided to partner with Ingo Hillmann to turn their passion for flying into a business, so that others might enjoy the exhilarating experience as well.

Hillmann, who is also a DHV (German paragliding association) paragliding instructor, tandem pilot, examiner, and performance trainer, with over 5,000 flights and 3,000 tandem flights under his belt, was the ideal business partner to get the company off the ground.

Although the company first targeted tourists, because it was thought that only a few Jamaicans would be interested, they have been taken aback, as since the inception of Paradise Wings Jamaica, over 700 Jamaicans have booked a flight, with the majority having flown across the skies of Skyline, Kingston; Bull Bay, St Andrew; and Malvern, St Elizabeth.

Only 10 tourists have shown interest in participating in the activity since.

“First time, me never know why me gravitate to it so much, but it’s kinda a feeling of freedom when ya do it. It feels so different because you have nothing weh you lock into, so your whole body just open up inna di air ... its just really totally different, mind-blowing,” Seiveright told The Gleaner on Saturday.

Paragliding, she said, has intrigued her to the extent where she is also working to earn her wings and other accreditations. She is currently undergoing training to become a solo pilot.

Hillmann, a native of Germany, found his way to Jamaica after searching on Google Maps for a warmer destination to paraglide during his time off from instruction in Europe.

Finding a second home in Jamaica, he continues to devote himself to flying on the island during the winter, while tending to his responsibilities as an examiner and instructor in Europe during the summer.

Hillmann, who has over 22 years of flying experience and flew for the first time in 2000 before going on to work for a German flight school in Bassano del Grappa, Italy, explained that he always had a fondness for the skies.

The best aspect of his job, he told The Gleaner on Saturday, was working in an environment which exudes happiness and with enthusiastic passengers, which brings him pleasure, as he never imagined himself working in an office.

“I like to work with happy people, and people who come to me and fly are happy,” he added.

Although he has piloted many passengers who are frightened by heights, he explained that once they take off into the open air, with incredible sights in view, they become enthralled by the experience, which make them lose their anxiety.

Fabian Grierson, Saturday morning’s first passenger at Skyline Drive in Kingston, who was sailing to the lawns of Papine High School, shared during a Gleaner interview that he has always been an adventurist who enjoys the high rushes of adrenaline pumping through his veins.

Grierson, who has some parasailing experience being towed behind a vehicle (usually a boat) in Negril, Westmoreland, said it was not as exciting as his experience that comes from actual paragliding.

“True, it has the boat tied to it, it don’t give you the little difference of a ‘no strings attached’ mentality,” he said.

Grierson, who won Paradise Wings’ Christmas raffle, said the 600 feet-above-ground flight was more thrilling. In his opinion, more people should take advantage of the adventures available in Kingston, rather than the nearly three-hour travel to St Elizabeth, which allows for more unpredictable weather changes.

“Sometimes the distance you have to travel makes it seem like you’re going nowhere, and the experience doesn’t happen,” he explained.

“It’s like driving a car with a driver, [or flying] in a plane with the pilot,” said Grierson, in an effort to encourage more Jamaicans to try new activities.

He continued, “You [have to] give him (the pilot) the confidence, [because] it’s not like [there is] a fear in you doing it yourself.”

Paradise Wings Jamaica is now seeking to launch a new site in Clarendon. Once the site is determined, such a location, said Seiveright, will allow for the passenger to be strapped into a harness in front of the pilot during tandem paragliding flights, where the pilot will be able to utilise a winch, allowing him to pull the glider up with a rope from the ground.

This, she added, eliminates the previous limitation of having to wait for the optimal wind and weather conditions to fly, because the pilot may use the winch to steer himself to the ideal location.

It is anticipated that the location will be secured by this November.