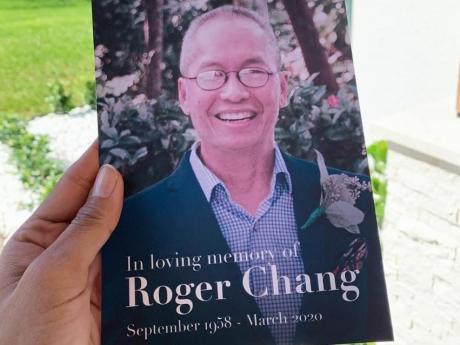 Chang went missing on March 2020 and was found dead the following day on a beach in Dover, St Mary, with multiple stab wounds to his torso.

A female exotic dancer and an auto repairer who pleaded guilty to the murder of businessman, Roger Chang have been handed life sentences for the killing.

They will both have to serve more than 20 years in prison before the possibility of parole.

Khadeisha McKenzie and Cebert Duggan are among five persons who had confessed to taking part in a murder and robbery plot involving the businessman.

They were sentenced by Justice Stephane Jackson-Haisley, after they entered guilty pleas between April 7 and May 20.

McKenzie pleaded guilty to the capital offence in the St Mary Home Circuit court and was ordered to serve 22 years and six months before being eligible for parole.

In relation to the other offences for which she pleaded guilty, McKenzie was sentenced to 12 months each on a charge of acquiring criminal property and illegal possession of firearm and 13 years for robbery with aggravation.

McKenzie was also slapped with a two-year and six months sentence for unauthorised access to computer data.

However, those sentences are to run simultaneously with the life sentence.

Duggan pleaded guilty to murder in the Home Circuit Court in Kingston and was ordered to serve 24 years and 6 months before being eligible for parole.

He was also sentenced to 13 years and six months for illegal possession of firearm and 13 years for robbery with aggravation after pleading guilty to both charges.

Both sentences are to run concurrently to the life sentence.

Three other conspirators, Ludlow Cousins, Jamar Jackson and Derrique Reid, who were minors at the time of the murder also pleaded guilty in the St Mary Home Circuit Court.

Jackson was also sentenced to eight years amid four months for robbery with aggravation and seven years and nine months for illegal possession of firearm.

The sentences for all three convicts will also run concurrently, hence they will only serve the longest of all their sentences.

A sixth person, who was implicated in the murder pleaded not guilty and is to return to court on July 14.

A statement from the Office of the Director of Public Prosecutions this afternoon did not identify that person, said to be Duggan's nephew, and McKenzie's boyfriend.

Chang, 62, went missing on March 2020 and was found dead the following day on a beach in Dover, St Mary, with multiple stab wounds to his torso.

The court heard that Chang and the 25-year-old exotic dancer met on Tinder, a dating app, and subsequently met on several occasions.

On the day he went missing, Chang had travelled with McKenzie to a river in Enfield in St Mary. At some point, before his trip, a plan was hatched to rob him.

During the robbery, a decision was made to kill Chang because he had seen their faces.

However, the court heard that Jackson, Reid and Cousins objected and left with their share of the money and other stolen items.

McKenzie, Duggan and the sixth accused transported Chang to the beach where he was murdered.