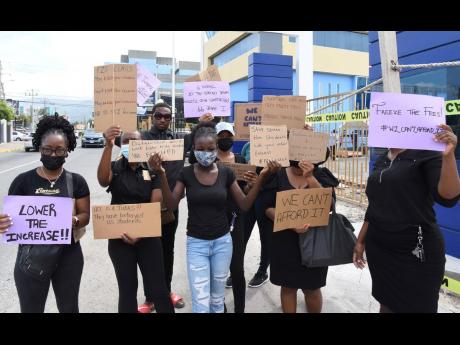 Ian Allen/Photographer
Students of the University of the Commonwealth Caribbean demonstrate against a hike in tuition fees outside the Worthington Avenue, New Kingston campus on Wednesday.

Students of the University of the Commonwealth Caribbean (UCC) protested at the gates of the Worthington Avenue-based institution on Wednesday morning over a hike in tuition fees, claiming that costs have risen by as much as 50 per cent.

Some students said they were first informed of the increase when they went online to register for the next semester.

Princess Small, a vocal student who has been rallying support, told The Gleaner that the administrators had confirmed the increase in an email, but said they were still in discussions.

Small said that days after that correspondence was issued, a document was sent to the students outlining an increase of 23 per cent for the next semester and 55 per cent for the summer of 2023.

“We were like, ‘Wow!’ We tried reaching out to them. Nothing! When the students’ council started to reach out to them, they basically shut them down,” Small said.

A pressure group led by Small, and including Jodian Peters, Marianne Elsa, Brandon McDonald, and Jessica Campbell, lobbied for a meeting with Professor Dennis Gayle, president of UCC, and Kevron Salmon, who heads the students’ council.

“The conclusion was sour. The voice of the students, they didn’t want to hear anything. They concluded that their meeting was not a negotiation. It was actually a meeting to tell us why they increased,” Small said.

A group of students have also complained of being blocked from UCC’s Instagram account because of a flood of negative comments about the tuition increase.

But the university has defended its decision, saying that undergraduate students who make full payment by prescribed dates will enjoy up to a 100 per cent fee waiver.

“As a private university, with no Government financial support, the UCC relies exclusively on tuition fees to fund its operations to ensure it earns the sums required to meet operating costs for instructional technology, expanded facilities to accommodate students and staff, faculty and staff compensation, increased utility costs, as well as other essential inputs needed to run the university, make fee adjustments imperative at this time,” the UCC president said in a statement issued on Wednesday.

Gayle said that at the start of the pandemic, UCC provided scholarships of up to 50 per cent for students to offset costs associated with their studies.

“The university cannot continue to absorb all the additional expenditures necessary to run a premier institution of higher learning,” Gayle said.

The university said that it will be increasing fees for undergraduate degree programmes, effective fall 2022, as hybrid classes resume.

The increase for returning hybrid -tutored students is approximately 23 per cent, or a new module fee of $37,000.