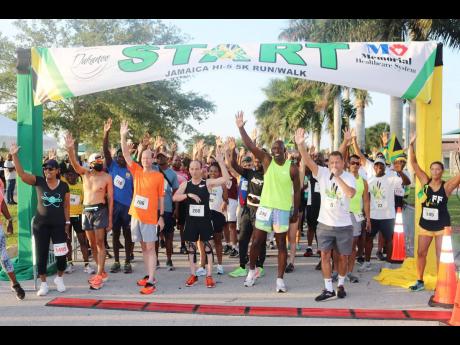 Derrick Scott
Jamaica’s Consul General in Miami, Oliver Mair gives starting orders to the participants in the 5th annual 5K Walk-Run which was held as part of the activities commemorating Jamaica’s 60th independence launch at the Miramar Park in Fort Lauderdale. 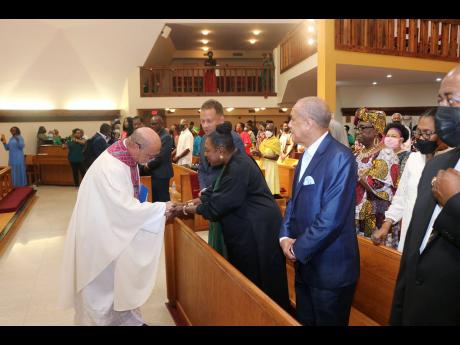 Jamaica’s 60th anniversary celebrations got off to a tremendous start in the southern United States with three major events which took place in South Florida last weekend.

The Florida launch, which featured three major activities which took place from Thursday, May 5 to Sunday, May 8, included a cultural extravaganza, a 5K Run-Walk and a thanksgiving service following closely on the heels of the official New York launch of Jamaica-60 by Prime Minister Andrew Holness earlier this month, at the Hyatt Regency Hotel in Jamaica Queens.

The events, which were attended by hundreds of Jamaicans and friends of Jamaica, were launched by Culture and Sport Minister, Olivia Grange, and Jamaica’s consul general in Miami, Oliver Mair.

Minister Grange said the Florida launch was a “testimony to the level of influence and impact” the Southern US diaspora centre has on the culture and economy of Jamaica.

She said, 60 years after Jamaica became a politically independent nation, the country had become a “global brand, acclaimed by other nations of the world for our accomplishments that have vastly outmeasured our geographic size – boasting a motto, Out of Many, One People”.

The minister said ‘likkle but tallawah’ is only one of the many maxims used to describe Jamaica’s “indisputable talent and acumen in almost every area of human endeavour”. This, she said, is why Jamaica can “enter every and any centre of American culture and economy and celebrate” the country’s 60th anniversary of independence.

She pointed out that “over these many years [Jamaica] established our country as a formidable partner for progress and prosperity, even as we continue to foster and promote, throughout the various international fora, a new world order of global equity, recognition, and justice for small island developing states”.

Minister Grange paid tribute to the “immense” contribution of Jamaicans in Florida to Jamaica, saying, “When you left the rock for the United States of America, you took with you the love and loyalty of your heart, the wisdom, and courage of your mind, as you set up home and business, determined to build one of the most formidable diasporas in the world. We salute your tenacity and business acumen, your patriotism and commitment.”

She appealed to members of the diaspora to share in consolidating the legacy that Jamaica has presented to its children, including the bridges that allowed smooth passage for people’s creative enterprise and industry, retaining their formidable structures, and continues to provide opportunities for growth and development for Jamaicans.

The culture and sport minister reminded Jamaicans that their story must be told to succeeding generations and must never be forgotten. “We must be determined to tell the stories of our sojourn here in South Florida and how we became the formidable diaspora. We must tell the stories of those from humble backgrounds in Jamaica who came here and became businessmen and women, lawyers, politicians, entertainers, doctors, nurses, public health officers, and so many others. Let us tell the stories of resilience, pride, commitment, resistance, indomitable spirit, and patriotism.”

The launch also featured an address by US Congresswoman Debbie Wasserman Shultz, who brought greetings from the United States Congress and said she was proud to join Minister Grange in celebrating Jamaica’s 60th year of independence. “I am especially thrilled to celebrate with the 18,000 Jamaican neighbours and friends who I am proud to represent in our nation’s capital.”

“I know that reigniting a nation for greatness could not be more fitting. Through all of Jamaica’s history and its challenges and triumphs, this small-but-mighty Caribbean nation has maintained her ability to astonish the world with its culture, brand, and the resilience of its people, “she said.