Get tough on sex crimes against kids, Cuthbert-Flynn urges 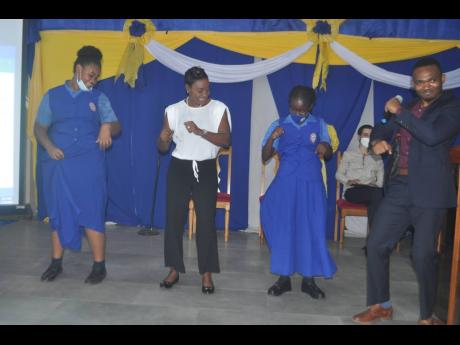 Photo by Rasbert Turner
State Minister Juliet Cuthbert-Flynn (second left) takes up the challenge given by students Shanna-Kay Vernal (left) and Rander Duhaney (right) to do the ‘Dirt’ dance. Looking on is Alexander Shaw, president of the past students’ association.

Jamaica’s junior health minister Juliet Cuthbert-Flynn has called for tougher action against the perpetrators of sex crimes against minors, especially interactions with those under 16 - the age of consent.

Cuthbert-Flynn said the pursuit of justice must have a high bar of accountability for those involved in sexual exploitation of the nation’s youth.

“It is my personal belief that if children under 16 are sexually involved, they can’t give consent, so it should be thoroughly investigated,” Cuthbert-Flynn said in a recent Gleaner interview, during a health fair at Jose Marti Technical High in St Catherine.

“Especially when the child is impregnated, the investigation should zero in on finding the perpetrator. It is a crime, and the law should be enforced,”

Jamaica’s high incidence of child sexual violence has been a perennial concern for lawmakers, and anxieties heightened over the more than two years of the coronavirus pandemic that children were at greater risk of exploitation. This was linked to restrictions that increased time spent inside abusive homes and reduced access to guidance counsellors because the Government shuttered schools for much of the time, in order to curb infection.

The state minister in the Ministry of Health and Wellness also raised alarm, citing 2020 data about HIV prevalence among youths. Hundreds of adolescents here have HIV.

“We are still awaiting another survey to ascertain if that number has changed. Still, it is a concern that our children are highly sexualised, and they must be educated on how to make appropriate decisions. We are having a multi-agency approach in trying to deal with the problem,’’ Cuthbert-Flynn said on May 18.

Meanwhile, Cuthbert-Flynn turned the spotlight on the early age of introduction to sex among teens and preteens. Boys, the data show, have earlier initiation.

‘’Research has shown that the boys started from age 11 to 13 and the girls are from 15 to 17. So there is clearly a problem that needs urgent attention, and we will be working to help and address the situation,” she said.

A five-time Olympian and gym trainer, Cuthbert-Flynn said that the health ministry has expanded its Jamaica Moves campaign to Ferncourt High in St Ann, and revealed that more effort would be made to take the programme islandwide.

Cuthbert-Flynn also implored the students to be vigilant about their diet. They were also urged to avoid sedentary lifestyles that contribute to obesity and other non-communicable diseases.

The health fair was part of the school’s thrust to raise awareness among its 2,400-strong population.

‘’We are aware that things have changed. Children are more engaged in activities and sex is part of it, so it is prudent that the past students’ association finds this inter-agency approach as a