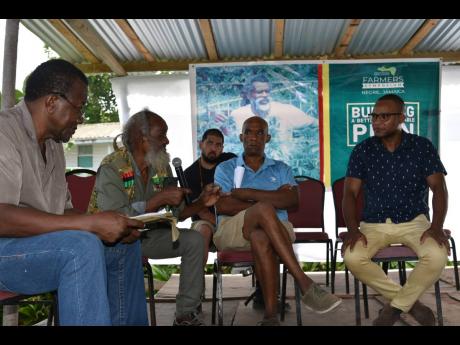 Herbert McKenis
From left: Delroy Johnson, chairman of the Westmoreland Hemp and Ganja Farmers Association (WHGFA); Ras Iyah V, ganja advocate; Kevin Edmonds, professor at the New College, University of Toronto, Canada; Danny Reynolds, director of communications for the WHGFA; and Morland Wilson, member of parliament for Westmoreland Western, participate in a panel discussion about building a sustainable plan for small ganja farmers at a farmers’ symposium on Saturday, May 21, in Negril, Hanover.

REELING FROM the economic impact of the coronavirus, the Westmoreland Hemp and Ganja Farmers Association (WHGFA) is seeking the Government’s approval to establish a ganja free zone to grow and sell their products within an established framework.

The proposed cannabis free zone would mirror the Amsterdam coffee shop model, to be called ‘Jamsterdam’, covering a geographic landscape stretching from the West End corridors of Negril through Sheffield to Orange Hill and Broughton, and into Mango Hall in the parish of Westmoreland.

According to Delroy Johnson, chairman of the WHGFA, Jamsterdam is a regenerative, sustainable economic project that the association intends to propose to the Government as the window through which small ganja farmers in the local communities can recover from the pandemic and sell their products and by-products.

“Everything cannabis could be grown in that area, and we make it a ganja free zone area in which banks and universities would be here. And we would create a community where we could try and manage within the legal framework,” said Johnson on Saturday, during the first staging of a ganja farmers’ symposium in Negril.

“This is not going to satisfy all the ganja-growing community at one time, but it can satisfy the Government if we, who are in the ganja business, decide that we will be willing to support this idea as a start,” Johnson explained at the symposium.

He added: “Once created, it will be a catalyst for the bigger picture of almost every community to have something similar like this.”

The WHGFA argued that their idea of a ganja free zone was not conceptualised while they were high from smoking a spliff.

“This is not something that we have dreamt up while having a smoke,” Johnson told The Gleaner. He argued that they have a workable project that they are ready to discuss with the Government, and their valued community partners, to catapult a prosperous economic future for ganja farmers.

“So, even if it was dreamt up while having a smoke, it was well worth the smoke,” he added.

Johnson said the Negril resort and commercial town provides a ready marketplace for both locals and tourists.

“We would argue that we have a ready-made situation, where we have a commercial district that is already willing and ready,” he noted. “What we need now is not money from Government, just the legal framework.”

In a landmark decision, the then governing People’s National Party amended the Dangerous Drug Act in 2015, which saw the decriminalisation of up to two ounces of ganja. It also authorised the establishment of a Cannabis Licensing Authority (CLA), which also gave permission for each household to legally grow no more than five marijuana plants.

Johnson said that the time has come for his farmers’ group to take advantage of the decriminalisation aspect of the law.

“Seven years have passed for us to now take up the baton and start the campaign for this free zone area, where we can test all of the limits,” he stated.

Richard Wallace, president of the Negril Chamber of Commerce, is cautiously optimistic about the idea.

“It sounds like a good idea in principle. But we would like to see the details of how it would work, and what exactly is the proposal, before we can fully endorse it,” Wallace, who represents the interest of the formal business community in Negril, told The Gleaner.

“I, too, share the view that after seven years of the decriminalisation of ganja, we haven’t seen the impact that we had hoped it would have on the economy and the local (ganja) producers,” he noted. “If this is a way to achieve it, then we would definitely support it, as long as all the legal frameworks are put in place.”

However, Ras Iyah V said that the cannabis free zone is not a battle that can be won in terms of acquiring Government approval.

“I like to fight battles that I think are winnable, and I don’t think this one is winnable. That’s my honest viewpoint,” said Iyah V, the founding chairman of WHGFA, who now serves as a member of the CLA.

Nevertheless, the ganja advocate said it is important for ganja farmers to approach the cannabis war on different fronts.

“If they can get support for this idea, then fine; it is worth pushing to see how the Government would respond,” he said. “But I would use my energy into trying to structure the organisation more by getting resource persons, youths with academic and technical skills that can communicate with other ganja farmers from other parishes, and get the unification going so that when we talk, it has a national and international reach.”