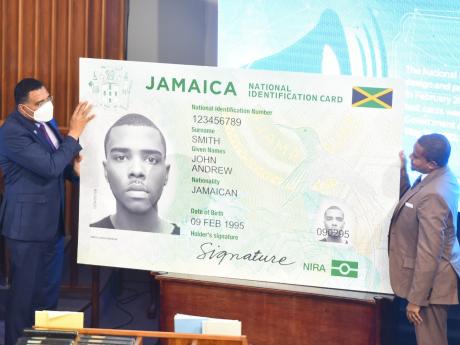 Prime Minister Andrew Holness (left) and Minister without Portfolio in the Office of the Prime Minister Floyd Green holding a display of the proposed National Identification System (NIDS) card in the House of Representatives on May 24, 2022. – Kenyon Hemans photo.

The National Identification System (NIDS) card will replace the need for the identification service of a justice of the peace (JP), Minister without Portfolio in the Office of the Prime Minister Floyd Green has announced.

Green, who has responsibility for digital transformation, said the card, once presented, eliminates the need for any other proof of identification in accordance with the National Identification and Registration Act.

“So, we are doing away with the requirement for the justice of the peace to say that you are who you say you are,” said Green.

He was making his contribution during the sectoral debate this afternoon in the Lower House when he made the declaration.

A Sunday Gleaner exposé confirmed that rogue JPs had been charging Jamaicans to verify their identity.

The Sunday Gleaner reported that JPs in several parishes had not only been charging fees for their services but were lying in letters of recommendation they wrote for complete strangers.

The investigation resulted in one of the rogue JPs surrendering his seal.

Justice Minister Delroy Chuck, at that time, also declared that there would be no amendment in policy or legislation to facilitate the payment or charge for JP services.

Meanwhile, Green said in two weeks, the government and several financial institutions are to sign a memorandum of understanding to participate in a pilot of NIDS.

Green said that this is to facilitate when NIDS is implemented, a simplified process of opening a bank account.