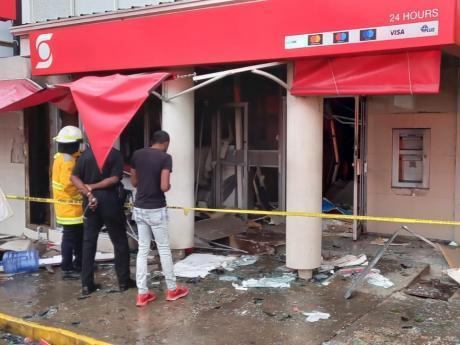 Hill, who is charged with arson, count house breaking, and creating public mischief, was remanded until June 3 when the matter will again be mentioned.

Calvin Hill, the security guard charged in connection with the ATM explosion at the Scotiabank in Port Antonio, Portland, failed to appear in court today because he remains hospitalised.

Hill, who is charged with arson, counting house breaking, and creating public mischief, was remanded until June 3 when the matter will again be mentioned.

The court was told that he is without an attorney.

The Bank of Nova Scotia in Port Antonio was rocked by a massive explosion shortly after 4:00 am on April 23.

It was later discovered that two ATMs at the front of the financial institution were destroyed, along with the main hallway.

The police later discovered a man lying in an incinerator, all bloodied up with a broken leg.

He was rushed to hospital and admitted under police guard.