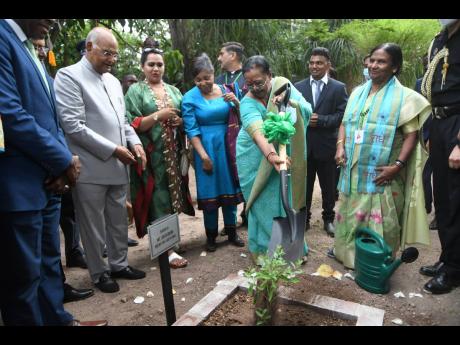 Contributed
First lady of the Republic of India Savita Kovind plants a sandalwood tree at the India-Jamaica Friendship Garden under the watchful eyes of her husband Ram Nath Kovind (second left), president of the Republic of India, and Lady Allen (fourth left), patron of the Hope Royal Botanical Gardens. The Indian president and Lady Allen also planted sandalwood trees during the visit to the friendship garden on May 16.

Colourful buntings featuring the hews of India and Jamaica welcomed the president of the Republic of India, Ram Nath Kovind, and wife Savita, together with their 20-man delegation on their visit to the India-Jamaica Friendship Garden inside the Hope Royal Botanical Gardens on Monday, May 16.

The friendship garden is located in an area of the Hope Royal Botanical Gardens designated for the planting of medicinal trees as part of the development plan by the board and management of Nature Preservation Foundation (NPF) – operators of the Hope Gardens.

A welcoming party comprising Lady Allen, patron of the Hope Royal Botanical Gardens; ministers of government: Fayval Williams, member of parliament for St Andrew Eastern; Pearnel Charles Jr; Senator Matthew Samuda; Franklin Witter, together with Alfred Thomas, chairman of the NPF, and Professor Carol Archer, board member of NPF, was in place when the convoy with the visiting head of state, led by police outriders, pulled up at the entrance to the friendship garden.

The first activity for that visit was the unveiling of the sign at the entrance to the India-Jamaica Friendship Garden, followed by a ribbon-cutting ceremony to declare a newly erected gazebo in the friendship garden officially opened. The donors of that structure joined Ram Nath Kovind in the ceremony. They are Drs Nagendrababu Chandolu and wife Alekya Daram, and Nagamalleswara Rao Chandolu and wife Saranya Munnangi, who operate their medical and dentistry practices in Annotto Bay, St Mary. This was followed by the planting of three sandalwood trees in the friendship garden by the visiting head of state, the first lady of India and Lady Allen.

As part of a memorandum of understanding signed in November 2021 between India and Jamaica, there are long-term plans for research to be conducted on the 75 medicinal trees in that area as part of a partnership between The University of the West Indies and a yet-to-be-named university in India to document the medicinal value of each tree.

“The board of NPF is now on an aggressive campaign to get private sector companies to adopt one of several gazebos located on the grounds of Hope Gardens. Through this adoption programme, each branded gazebo will be repaired and maintained by the sponsor,” said Thomas.

As the lively sounds of the Rumbakah group of Charlemount High School filled the space, members of the visiting delegation could be seen taking photos and videos of the performances. They also caught the attention of Ram Nath Kovind, who stopped to applaud the group.

On his departure, the visiting head of state also greeted other members of the board of NPF, Neville Henry and Marigold Harding, as well as the NPF executive director, Carla Myrie.