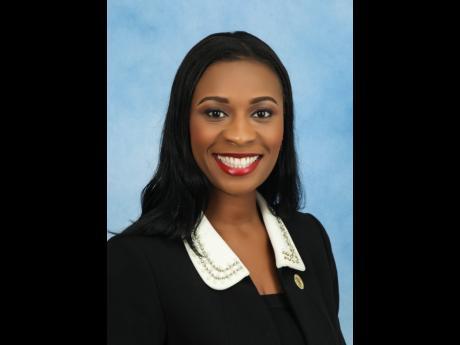 Ingleton's appointment completes a change in the top leadership of the training agency that has been rocked by a series of scandals over its governance and use of taxpayers' money. -Contributed photo

He says Ingleton, a vice president at the Caribbean Maritime University, will take up her new assignment on August 1.

"The board is satisfied that Dr. Taneisha Ingleton possesses the requisite knowledge, competence, and passion to lead the HEART/NSTA Trust through this significant period of change and strengthening consistent with our mandate," Wint said in a staff memo.

Wint thanked Novelette Denton-Prince for her "stellar leadership" as interim managing director since last April after the board did not renew Dr Janet Dyer's contract. Denton-Prince is expected to go back to her substantive position as senior director of corporate services.

Ingleton's appointment completes a change in the top leadership of the training agency that has been rocked by a series of scandals over its governance and use of taxpayers' money.

In January, Wint replaced businessman Edward Gabbidon, who stepped down last December amid public concerns about him holding the chairmanship while being the CEO of a company that is a major technology supplier to the agency.

After revealing that HEART spent more than $5.7 million on a board retreat with senior managers at a luxurious St Ann hotel in October, Prime Minister Andrew Holness told Parliament in December that the agency was in need of a refocus and would be subject to a comprehensive strategic review.

Holness is responsible for HEART.

The Jamaica Education Transformation Commission is to lead an institutional review of the HEART NSTA/Trust, he said in January after the publication of a damning report on the state of education in the country.

Up to two years ago, the HEART managing director job carried $12.5 million in basic salary but since a recent merger, new salaries have been approved.

HEART spends billions of dollars each year, most of which it collects through a tax on employers.

An Auditor General report in 2020 raised questions about the agency's certification rates despite spending millions of dollars on training.

1. Joined the Caribbean Maritime University as vice president for administration in August 2021.

2.Served the Ministry of Education, Youth and Information for seven years up to 2021; four of those years as Director/Principal for the National College for Educational Leadership

4. A published author and motivational speaker.