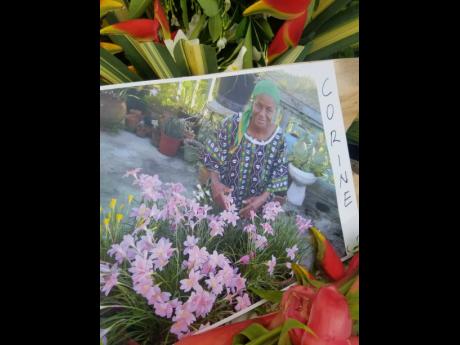 Contributed
Until the very end florist Corine Smith was always surrounded by flowers. 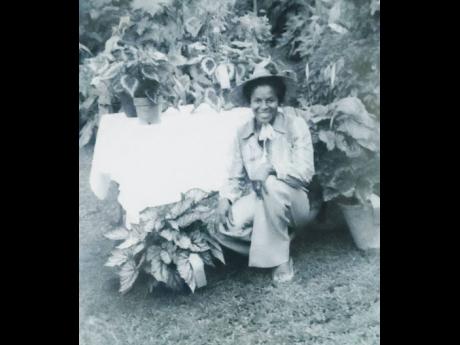 Corine Smith, 79, had been ailing for a brief while, but seemed to be on the path to recovery up to last Wednesday.

Last Thursday morning she was rushed to the University Hospital of the West Indies after complaining of feeling unwell.

There, she suffered four cardiac arrests in the space of a few minutes. Valiant efforts to resuscitate her were not successful.

Smith had one of the most exotic private gardens of flowering and non-flowering plants in the island. Some of them are quite rare.

She was a many-time Horticultural Society of Jamaica award winner. For several decades she had been the go-to person for a variety of flowers and floral arrangements for just about any occasion. She was also well known in the expatriate and diplomatic circles for her exquisite pieces.

For about 30 years she operated the Garden Gallery from 1 Mannings Hill Road, St Andrew, where she also traded in antiques, some of which she restored herself, and sold her husband Eric’s paintings. He predeceased her about 20 years ago, and was one of Jamaica’s most famous painters. He was widely known for his ‘flowers pieces’. She was also an accomplished and highly patronised seamstress, who was a very stylish and fashionable person herself.

Smith, along with her son, Andrew, had been a fixture for more than five years at the weekly market at 22 Barbican Road, St Andrew, where she continued to sell her plants, food from her farm, and miscellaneous items. Last Saturday, some patrons who had gone to collect orders were shocked to see her photograph, surrounded by flowers and a condolence book. There was much outpouring of support for her son, who is devastated not only by his own loss, but by the scant regard, he said, that was shown to Smith at the Accident and Emergency entrance of the hospital, despite her desperate pleas.

While speaking to The Gleaner about the fond memories of going to horticulture shows with his mother at the National Arena, Smith sobbed. He recalled a woman who was short in stature but physically and mentally strong. The “fighter” who “worked like a man” taught him woodwork, and helped him develop an entrepreneurial mindset. She was the mouthpiece for the family, the go-getter, who took no vacation, to which he said, “Go rest now, Mommy.” She is also survived by son Ericson, daughter Velene, and two granddaughters.

At the gathering at her booth in the market on Saturday, The Gleaner spoke with some of Smith’s former customers. Norma Green recalled her vast and expert knowledge of growing and taking care of plants. As a customer and friend, she described Smith as “one-of-a-kind” and “caring”, and said that the way in which she was treated at the hospital was sad. She was there to see the drama unfolding. Yet, she also remembered Smith’s fruit juices and her chocolates, which she said were the best you could ever get.

Suzann Morris was looking forward to sitting and chatting with Smith for a while, but when she turned up, Smith had not. “I follow her for what she sold, but also for who she was. I found her to be accommodating; those people are hard to find. I sit down in the market with her talking because she was entertaining and pleasant ... I miss her ... . It’s going to take a long time to forget a lady like this. She made the best chocolates in all of Jamaica,” she said.

And in her recollection, Andrea Sibblies, long-time friend and associate of Smith, reflected thus: “I call her a legend. Anyone who has met her, she has left an indelible mark on their lives, whether it is for the good, the bad or the better ... . She has a way of encouraging and empowering, and she is highly opinionated, but that also was a good thing ... . She speaks real, and there are times when we need to hear the truth. The truth may not be easy, but she was old enough to speak the truth with love.”