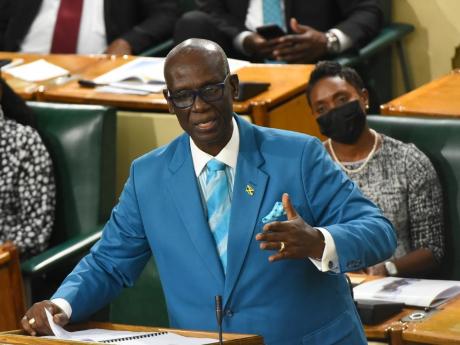 Minister of Local Government and Rural Development, Desmond McKenzie, making his contribution to the 2022/23 Sectoral Debate in the House of Representatives on May 25. -Contributed photo.

The Government has paid in full the $2.9 billion charged by the Jamaica Public Service (JPS) for the provision of streetlights in the last financial year.

Minister of Local Government and Rural Development, Desmond McKenzie, made the disclosure during his contribution to the 2022/23 Sectoral Debate in the House of Representatives on Wednesday.

“We pay an average of $243 million on a monthly basis for streetlight. The reality remains, however, that not all the streetlights are working and the local authorities and the citizens who fall within these areas across the country deserve better,” McKenzie said.

He noted that the Ministry has been meeting with the JPS to resolve a wide range of issues, and the consultations are continuing.

In the last financial year, the company installed 725 new streetlights, which were 358 short of the target of 1,083.

In addition, 13,575 streetlights were repaired and the JPS reported that more than $47 million (US$303,660) was spent to replace 723 streetlights that were stolen.

“The taxpayers of this country must know that the average cost of replacing one streetlight is US$420,” the local government minister said.

He informed that Chesterfield main road in St Andrew is the site of repeated thefts with 32 lights, along with 3,200 metres of service wire, stolen on three separate occasions.

These items have been replaced at a cost of nearly US$50,000.

“JPS is reporting that lights along the Chesterfield main road have been stolen for a fourth time and that it will cost US$16,000 to replace them,” said McKenzie.

He also cited the Hellshire main road in St Catherine, where 15 lights and 1,500 metres of service wire were stolen on one night.

These lamps and wires were replaced at a cost of US$7,800.

“While it is clear that these criminal acts require a police response, it is not the responsibility of the constabulary alone. [It is] all of us as Jamaicans because somebody must see something. It is the taxpayers of this country who will have to foot these expenses because the JPS will have to recover the cost,” McKenzie said.

He further called on residents to be vigilant to prevent the highways and byways from being plunged into darkness.