$15m spent to get water to Montreal, Oxford residents in St Mary 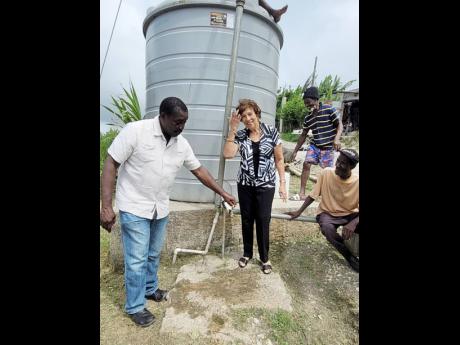 Contributed
Member of Parliament for Western St Mary Robert Montague turns on a tap as residents look on.

Using solar pumps to aid operations, over $15 million has been spent to get water to approximately 1,000 residents of Montreal and Top Oxford in Western St Mary.

Member of Parliament (MP) for the constituency, Robert Montague, along with councillors Doreen Hutchinson of the Carron Hall division, and Jason James of Gayle division, along with representatives from Rural Water Supply Limited and the National Water Commission last Thursday to ensure the new systems were turned on.

Montague said Montreal has been without water for several years and as MP he was able to install a standpipe some distance from the community.

“I finally did a project with Environmental Foundation of Jamaica, firstly, to provide a solar pump from the spring so that the primary and basic schools and the upper section of the community could get water,” Montague told The Gleaner.

He said Rural Water spent approximately five million on the Montreal system which will serve about 300 residents.

Pat Clarke, a resident of Montreal, told The Gleaner that she and other residents have been waiting many years for a decent water supply system.

Over at Top Oxford, also known as Pouring Water, $10 million was spent to get water from a spring known as Hand-to-Mouth, to serve over 700 residents.

“Top Oxford has suffered from a lack of regular water because they get water from the NWC through the Crescent Water System which is extremely unreliable,” Montague said.

A solar system was put in place to operate a pump which enabled water to be pumped into a catchment area on a hill that stores 4,000 gallons, from where water was gravity-fed to the community.