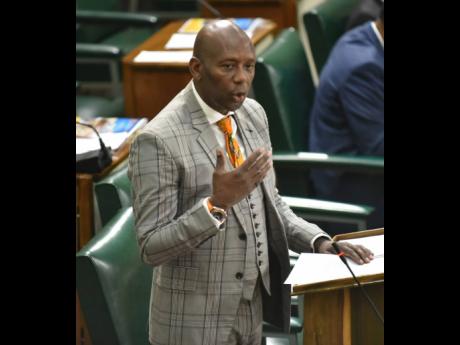 Kenyon Hemans
Opposition spokesman on commerce, science and technology, Hugh Graham, making his contribution to the 2022 Sectoral Debate on Wednesday.

Digital transformation is not an option but a must for Jamaica, in line with the vision for the Ministry of Science, Technology, Energy and Technology to build out a globally competitive information and communications technology (ICT) with the broadband ability to contribute significantly to social and economic development. However, this vision must be supported by the necessary accompanying digital transformation, which anticipates emerging trends, and this is not happening for Jamaica, according to the Member of Parliament for St Catherine North Western Hugh Graham.

The Opposition spokesman on commerce, science and technology said while he supports the Government’s vision for the sector enunciated by Minister of Science, Energy and Technology, Daryl Vaz, it does not recognise and anticipate that digital transformation changes everything – people, culture and processes.

Graham, who was making his contribution to the Sectoral Debate on Wednesday, said that despite the roll-out of community Wi-Fi hotspots and the launch of three sites specifically to serve the disabled community, Jamaica is still locked in a serious digital divide.

He said that the pandemic exposed the underbelly of our digital divide and Jamaica remains digitally poor while the Government is guilty of still being neglectful and reactive. He offered suggestions on how to make up lost ground.

“Alternative modalities such as satellite connectivity designed to provide broadband services with equitable geographical distribution cannot and does not replace fibre-optic plans. It augments, complements and it supports and prevents those communities from getting left behind and limits the digital divide along with the use of aerial fibre that can be deployed to rural areas to provide affordable broadband to all.”

In fact, Graham suggested that connectivity frontier could be augmented with the combined use of a digital connectivity infrastructure, using a combination of satellite connectivity, aerial fibre and even extending to an entity of small satellite constellations to reach unserved and underserved communities. While arguing for continued expansion of the connectivity network to reach more rural communities, the member of parliament for St Catherine North Western insisted that policies should be enacted to ensure that digital literacy is a part of the programme, going forward.

“In the years ahead, emerging technologies such as artificial intelligence and telemedicine will require broadband network capable of delivering at much faster speeds and high reliability, such as 5G. However, we need to get the basics right because 5G is the way of the future. Research suggests that by 2025, 56 per cent of all mobile subscribers worldwide and 65 per cent of all subscribers will still be using 4G technology, a further 12 per cent will still be relying on 2G or 3G technology. Right now, 4G coverage is minimal and covers only nine per cent of our population.”

Meanwhile, in his review of the 2030 operational vision outlined by Vaz, Graham said it did not include expansive plans for connectivity in rural areas, which, given the urgent need for islandwide broadband coverage, is cause for concern.