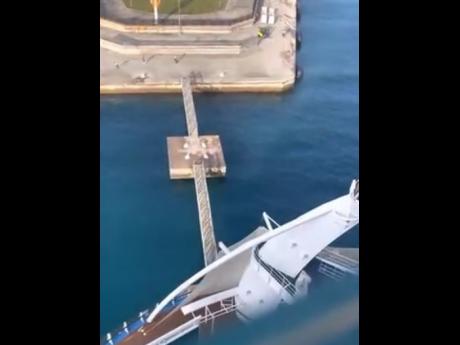 The PAJ says the cruise ship collided with a mooring dolphin, a structure that extends from a main dock to help secure ships.

The Port Authority of Jamaica (PAJ) is cautioning "all parties" against speculation about Thursday's collision involving a cruise ship at the Historic Falmouth Port in Trelawny.

The authority's statement follows today's comments from Tourism Minister Edmund Bartlett that the crash of the Royal Caribbean Harmony of the Seas vessel into the dock was caused by 'pilot error'.

According to Bartlett, the incident occurred when the pilot was badly directed while attempting to dock the vessel.

But the PAJ, which is responsible for the port, said it is undertaking a joint investigation with Royal Caribbean to determine the cause of the crash.

"Pending the investigation, any determination of the cause of the incident is premature at this time and we therefore urge all parties to refrain from any speculation in this regard," said the agency headed by Professor Gordon Shirley.

The authority said it is following the Pilotage Act, which outlines how the investigation should be approached. It includes appointing an investigator and getting a report from the ship's pilot.

Based on the investigator's report, the PAJ may opt for a formal enquiry.

Meanwhile, the PAJ has explained that the vessel collided with a mooring dolphin, a structure that extends from a main dock to help secure ships.

"This minor incident did not result in significant damages to the vessel. The vessel was eventually moored without delay using the remaining infrastructure of the bollards on the remaining dolphin, to stabilise the vessel. Subsequently, passengers were able to disembark and proceed as planned to their tours and other scheduled activities," the statement said.

The PAJ said the mooring dolphin was displaced and will require reconstruction.

"Our Engineering Department is currently assessing the damage for further action. The Falmouth port facility is designed to accommodate the safe berthing of vessels, notwithstanding the inaccessibility of the mooring dolphin, and will continue to do so as per normal port operations," it added.

The PAJ said the incident will not result in any disruption to cruise shipping operations or require any adjustments to cruise schedules.