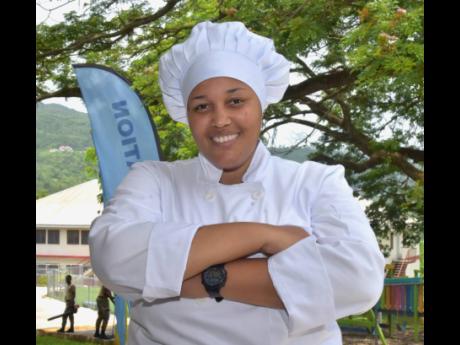 Ashley Anguin/Photographer
Ruth-Ann Collins, a student at the Caribbean Christian Centre for the Deaf in Granville, St James, is banking on her passion for food to propel her to one day becoming an executive chef.

Despite losing her hearing as a toddler, Ruth-Ann Collins is not about to let her disability stand in the way of her dream of becoming an executive chef who oversees kitchen operations in a hotel or restaurant.

“I want to reach the top chef position – to be an executive chef,” the 37-year-old Collins, who grades her current culinary skills at eight or nine out of 10, told The Gleaner through a sign-language interpreter.

The Cambridge, St James, resident said she had always been interested in learning new ways of cooking and so in January 2021, she enrolled at the Caribbean Christian Centre for the Deaf (CCCD) in Granville, where she is currently training to be a commis chef, or a novice chef who provides support in a commercial kitchen.

While she is enjoying her tutelage at the CCCD, Collins admitted that it was not easy living as a deaf person prior to her enrolment at the 32-year-old campus.

Her mother, who is a deaf educator, has been a major source of inspiration for Collins.

“I became deaf when I was two and a half years old. I had frequent fevers, colds, and sweats at night, and my mom used to put me in the refrigerator to cool off, but then my mom realised something was wrong when the pot cover fell off one day and I didn’t do anything in response,” Collins recounted.

“The recurring fevers affected my ears and it resulted in my hearing being blocked. My mother is also deaf, and she taught me how to cope and how to have faith. I didn’t allow my deafness to define me, and while I had a lot of challenges, I realised that I could overcome them,” she added.

Prior to attending the CCCD, Collins was a student at the privately run Montpelier College. She later got a job as a housekeeper at the Montego Bay-based S Hotel, although she ran into difficulties when the onset of the COVID-19 pandemic resulted in her having to leave the job.

“It was hard to get a job sometimes, and those are the challenges that we face, but I did not give up and I kept persevering. I started working there at S Hotel in March 2019, but because of COVID-19 I was impacted,” Collins recalled. “It was hard for me to work with a mask because of my deafness, because reading your lips helps me to communicate, so I had to stop in 2020. I want to go back there because I loved the experience at that hotel.”

Her ability to get fresh employment could be easier now, thanks to the passage of the Disabilities Act, which came into effect on February 14 this year. The key points of focus in the act, which was passed in Parliament in 2014, include the right to education and training, employment, and healthcare, and the establishment of the Disabilities Rights Tribunal to hear and settle complaints of discrimination.

For now, Collins continues to hone her culinary skills.

Her favourite meal to prepare is cordon bleu, a dish of meat wrapped around cheese and then breaded and pan-fried or deep-fried, and she also specialises in poultry dishes.

Being no stranger to difficulties, Collins wants other persons with disabilities to keep persevering.

“You will face challenges and situations, and that will happen, but do not allow that to make you feel less than a person. You have a better future, and you can succeed. Not because you are deaf or have a disability, you can still do it,” said Collins.