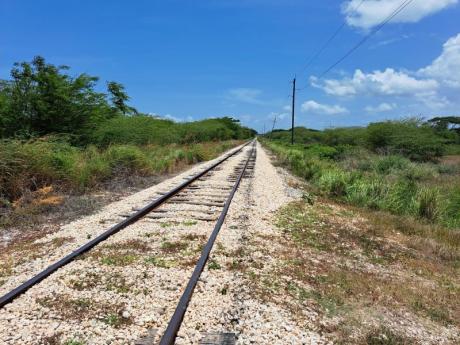 Section of the track between McCooks Pen and Amity Hall in St Catherine where a man believed to be of unsound mind was hit by a train on May 27, 2022. - Ruddy Matthison photo

A man who is believed to be of an unsound mind is being treated at the Spanish Town Hospital in St Catherine after he was hit by a train in the parish yesterday.

The train is operated by the Jamaica Railway Corporation.

The incident took place at about 4:30 p.m., on a section of the track between McCooks Pen and Amity Hall.

Residents say the man was lying on the track.

At least one of his legs has reportedly been injured.

"A him regular practice to go lie down on the train line, yesterday mi hear when the train a blow and then it stop and we hear sey train hit him," said one resident who did not want to be named, adding that the man lives in abandoned houses in the area.

"None a we don't know where him come from. All we know sey him set fire to a lot of properties. Him even set fire to that one over deh so," the resident said, pointing to a burnt out plot of land that was recently lit.