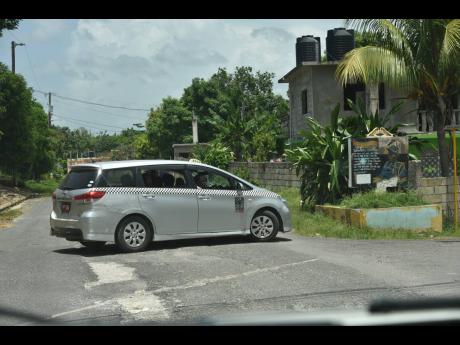 Photo by Mark Titus
Residents of Rose Heights in Montego Bay, St James only allow vehicles with their windows down to enter the community following last week’s deadly attack. 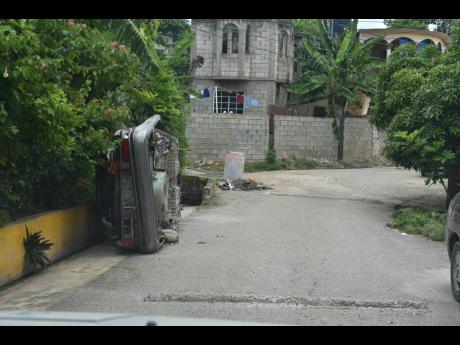 Photo by Mark Titus
Most of the streets in Rose Heights in Montego Bay, St James were deserted when The Sunday Gleaner team visited on Friday.
1
2

A deadly gun attack last Thursday has landed Rose Heights back in an all-too-familiar and unenviable territory as warring gangsters mark each other for death. Frightened residents remain tight-lipped as the fear of becoming a victim after revealing the evils they see is real. Preferring to take their chances with silence – even while knowing that does not guarantee they won’t become innocent victims in the bloody mayhem – it is creating a challenge for law enforcement.

Located just three kilometres on the outskirts of the city of Montego Bay, Rose Heights is one of the largest of the 23 garrison communities in St James, with an estimated population of just under 7,000 in 1,886 households across its 14 neighbourhoods, including Catherine Pen, Villa Heights, Bronx, Bay Route, Branch Hall, Top Road, Vietnam, Green Tank, Down Kirk, Forty-One and Marl Road.

Murders, shootings, and robberies are common in Rose Heights and, during a particularly difficult period between January and September 2009, 79 funerals were held for murder victims. In one brutal two-week span, more than a dozen persons were killed.

Tired of burying victims of violence, the late Reverend Knollis King of Rose Heights Full Gospel Church had established the Rose Heights Covenant of Peace (RHCP) that challenged residents to work with him to restore peace, order, and respect.

The organisation was resolute and uncompromising, as members would go out and apprehend known gunmen, sometimes with the knowledge and consent of their families.

The former councillor for the Montego Bay South East Division, who died last August, had also established a homework centre at his church and social programmes where young ladies were taught skills such as baking, sewing, and housekeeping, opening opportunities for employment locally and overseas.

The competitive Kings Netball Team and the Rose Heights Marching Band he founded remain very popular and his initiatives are credited for a peaceful period when no murder was committed in the community for nearly three years, and minor offences were cleared up within 24 hours.

But the vigorous community activism did not get much-needed governmental and corporate support and the RHCP’s relevance in the community was eventually replaced by the ill-gotten gains from lottery scamming, by the time of the clergyman’s death.

Now, the community is on edge following a series of attacks in recent times, said to be an ongoing conflict among gangsters in the area.

Last Thursday, a drive-by shooting at a birthday party along Marl Road in the community left two persons hospitalised and claimed the lives of 27-year-old Chadwell Fraser, otherwise known as ‘Bomb Brain’ or ‘Chad’, of Felicity Road, Glendevon; Chamario Calvin, aka ‘Chippy’, 24, of Ball Ground, Rose Heights; and Toniann Reid, aka ‘Too Fly’, of Jarrett Terrace – all of St James.

It followed another triple killing in nearby Matches Lane in March, when men travelling in a Toyota Allison motor car drove up to a group of people and alighted before opening fire, killing three men and wounding one.

Now, residents have been warned that not even the newborns or the elderly are safe, as the rivalling gangsters threaten each other on social media.

Audrey Stone, president of the Rose Heights Community Development Committee (CDC), is hoping that all is not lost for the place she has called home for more than two decades.

“I am not here telling you that things don’t happen here, but Rose Heights is a nice community. I have been living here for more than 25 years, and the problems are not different than anywhere else,” said Stone, who is also one of the community’s 15 conflict mediators.

“Pastor King did a great job with his covenant of peace initiative to hold the community order, but nobody has come forward to take up the void left by his death. It has become more difficult to get residents to resolve their conflicts amicably, and we struggle to get members of the community on board,” she told The Sunday Gleaner. “Many people are just not interested in being associated with their CDC.”

The streets were deserted on Friday when our news team visited the community, where tension remained high, with lookouts posted at the entrance to each roadway.

A contact had warned us to ensure that all our windows were wound down – an instruction also given to taxi operators, and even delivery truck drivers, by the gangsters.

No one entertained a conversation with our news team, each person looking on nervously as our vehicle approached.

A sports utility vehicle was parked on the lower end of a roadway off Marl Road, blocking an attempt by The Sunday Gleaner to drive through the area. Persons seen there advised that it was not a good time for strangers, and we quickly exited the area.

Assistant Commissioner of Police Clifford Chambers is hoping that good sense will prevail and residents will come forward with information to help police investigations, but admits that there are challenges.

Heroy Clarke, the St James Central member of parliament, wants a purge of the St James Police Division, claiming that many of the cops are too friendly with the gangsters.

“A police post doesn’t work for these communities,” he said, referring to murders in Norwood since it was blanketed by a zone of special operations. “Everybody knows that an army post is there, but yet there is shooting. So it would be more meaningful if we had patrols and spot checks.”

Added the MP: “We need something meaningful, not just to put up a façade, but my take is that, until we can get rid of the bad weeds among our state security, we are not going anywhere.”

The Sunday Gleaner was unable to get a police response to the claims.

A 2011 Social Development Commission priority plan for Rose Heights had noted then that 30.1 per cent of residents felt unsafe, while 51 per cent feel very safe or safe in their community. Some 25.1 per cent believed the level of crime was high, while 56.7 per cent thought it was low. Fifty-one per cent of residents were of the belief that it is unlikely that they would fall a victim of crime, but 17.3 per cent felt it was inevitable.