No Festival Song Competition due to poor entries 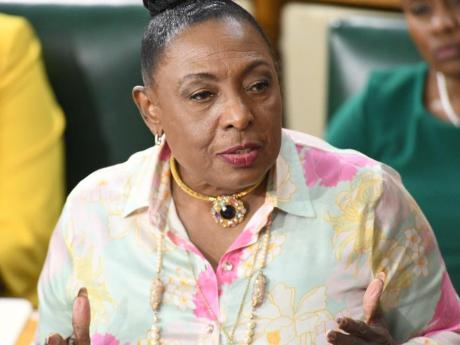 Grange:" I’ve instructed that we ramp up our Jamaica Festival Song workshops over the next 12 months, now that COVID-19 restrictions have been lifted, to ensure that the competition returns next year with much improved entries." -Rudolph Brown photo.

The Jamaica Festival Song Competition will not be a part of this year's 60th independence celebrations due to poor entries.

Minister of Culture and Entertainment Olivia 'Babsy' Grange today indicated that the panel established to select the finalists advised that it was unable to choose 10 suitable songs from the entries, despite extending the deadline.

“We received 123 entries, much less than previous years. Under the circumstances, the Jamaica Cultural Development Commission (JCDC) will refund all entry fees in the amount of $123,000,” said Grange.

“I've instructed that we ramp up our Jamaica Festival Song workshops over the next 12 months, now that COVID-19 restrictions have been lifted, to ensure that the competition returns next year with much improved entries,” she said during her contribution to the sectoral debate in the Houses of Parliament this afternoon.

Grange said the disappointment comes after a period of tremendous growth in the competition which has seen the finalists in each of the last two years appearing on several music streaming services across the world.

Over the same period, the JCDC and the competitors were able to earn royalties for the first time.

“Last year, the Jamaica Festival Song album was even included on a shortlist that was considered for nomination for the Reggae Grammy. But there is a silver lining behind this dark cloud,” Grange said.

The minister said the opportunity will be used to produce a Jamaica 60 commemorative album, which will include two songs that were selected from the festival song entries and songs from Jamaica's leading reggae ambassadors and emerging artistes.

Shaggy, Marcia Griffiths, Freddie McGregor and other established artistes have made commitments so far.

The minister said it is her hope that the album will be considered for nominations for the Reggae Grammy.