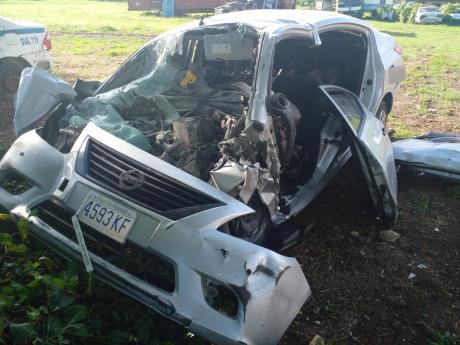 The mangled car in the fatal June 5, 2022, crash along the Barbican main road in Hanover. The three occupants were killed. - Hopeton Bucknor photo.

The police have now identified the three gunmen who were killed in Sunday's crash along the Barbican main road in Hanover.

It is reported that around midday, Reid, Lazarus and Scott were travelling in a Silver Nissan Latino motor car from the direction of Montego Bay towards Lucea.

On reaching a section of the Barbican main road, they reportedly received news that a police spot check was being conducted along the Mosquito Cove main road.

It is reported that the driver quickly turned around the vehicle and sped back in the direction of Sandy Bay.

On reaching a section of the roadway, the driver reportedly lost control of the vehicle which collided into a JUTA tour bus that was transporting four tourists from Montego Bay to Negril.

The occupants of both vehicles including the tour bus operator and the four tourists sustained injuries and were rushed to hospital where Lazarus, Reid and Scott were pronounced dead.

The injured tourists and the tour bus operator were treated.

A search of Lazarus, Reid and Scott and the vehicle in which they were travelling led to the seizure of two illegal guns which contained ammunition.

The police indicated that it has been revealed that Lazarus was charged with murder and in a separate case of shooting.

He was out on bail in both cases.