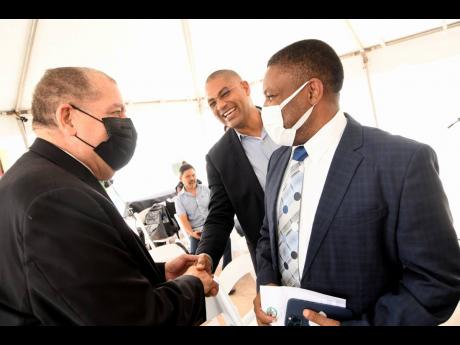 Rudolph Brown/Photographer
Audley Shaw (left), minister of transport and mining, talks with Phillip Paulwell (right), opposition spokesman on energy, while being greeted by Mikael Phillips, opposition spokesman on transport, at the Jamaica Gasolene Retailers (JGRA) Road Safety Month launch on Wednesday. The theme for Road Safety Month is ‘Safe Roads Together With Safe Vehicles Help To Keep Our Children Safe’ at Fesco service station on Beechwood Avenue in S Andrew.

The growing number of road fatalities and injuries on Jamaican roads has reached crisis proportions and must be treated like the country’s emergency with crime, Cabinet minister Daryl Vaz has said.

His remarks were made against the backdrop of spiralling traffic crashes this year and 487 related deaths in 2021.

Delivering the keynote address at Wednesday’s launch of the annual observance of Road Safety Awareness Month, Vaz admitted that something has been burning within him for a long time in relation to the breakdown in discipline on our roads.

“We are in a similar crisis as to what is happening with the murder rate with weapons and guns,” Vaz, the minister of science, energy and technology, declared.

“... I see it and it hurts me because I realise that without law and order and discipline, you are no longer a civil society,” he said, paralleling the country’s security woes.

Vaz theorised that ignorance and illiteracy are root causes of reckless behaviour.

“If you were to do a random literacy test at all of the checkpoints that the police and the Transport Authority do individually and collectively, I guarantee you that you will find people with general driver’s licence that can’t spell cat or bat,” the minister said.

Citing the tabling of the regulations around the new Road Safety Traffic Act by Minister of Transport and Mining Audley Shaw the day before, Vaz said the Government is doing what is required legislatively to facilitate safety.

The use of technology, which will include cameras at traffic lights to record infringements by rogue drivers, is on track, he said.

“Technology has to be part of it … . I can commit to you that we will make it happen, but we cannot work in silos,” he said.